Seventy-Two Nurses Recognized for their Invaluable Contribution to Health Care in St. Kitts-Nevis

Basseterre, St. Kitts, May 13, 2019 (SKNIS): Seventy-two (72) nurses in St. Kitts and Nevis were recognized on Friday, May 10, for their invaluable contribution to the healthcare sector during an awards ceremony held at the Joseph N. France (JNF) General Hospital.

“What we are doing here today is no different to everything else that we come here every year to do, to recognize performance, to recognize dedication, to recognize commitment to service when it comes to rendering the type of quality health care that the people of St. Kitts and Nevis deserve and expect to get to receive, and or obligated to get and receive without fear or favour,” said Minister of State with responsibility for Health, the Honourable Senator Wendy Phipps.

The Honourable Eugene Hamilton, Minister of Health, congratulated the awardees and said that nurses should always perform their duties with a level of compassion.

“You are called upon to exhibit empathy to all of your patients no matter how disgusting you think they are,” said Minister Hamilton. “To my mind, with the scarce resources that we have available to us and perhaps the conditions under which you work, you probably abhor, but to my mind you do a fantastic job nevertheless and I applaud you for the job that you do.”

Minister Hamilton used the occasion to remind nurses that the world “we” live in isn’t perfect and offered words of encouragement.

“And so I want to encourage you to see the things you do, the environment in which you work, your home, your school… and to see things not as the glass being half empty but as the glass being half full because it makes a difference in how you approach the tasks that you do every day,” he said, while encouraging them to appeal more to young persons. “Young people need encouragement to join this noble profession and if we continue to behave like this profession is noble then young people will see something in what you do that will encourage them to want to be part of this noble profession.”

Collin Mulley; Vanessa Matthew; Clariscia Natta; Alister Browne; Osin Guishard; Raymond Grant; Alphonso Wilkin; Brenda Browne; Sema Merritt; Lorna Prentice; Marcel Lawrence; Millicent Rennix and Henrietta Warner were among the 13 Allied Staff who were awarded with perfect attendance in 2018. Additionally, special awards were given in the categories of most improved, most helpful, most outstanding unit and unit of the year.

Senator Phipps presents tokens to persons within the nursing fraternity 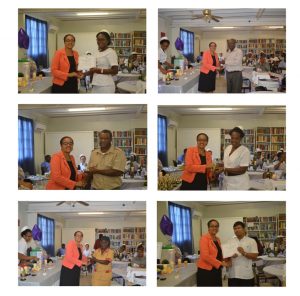 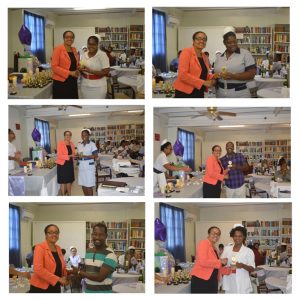 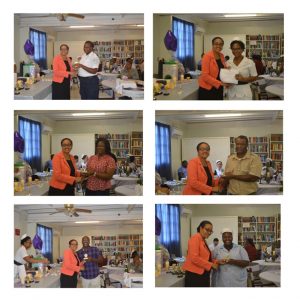 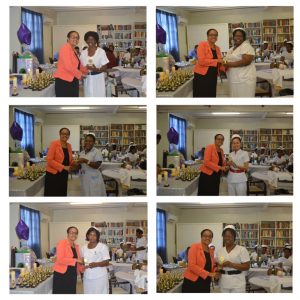