The Fall Swim Fest Swim competition, hosted by the Nevis Aquatic and Sailing Center, has been rated as a huge success. 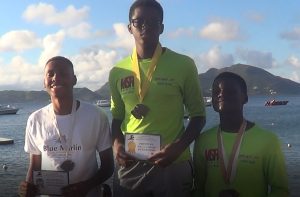 The event commenced at Oualie Beach on Sunday 23rd October, with warm-up activities by the swimmers, being closely monitored by their Coaches.

Event Manager, Valerie Gregore indicated that there were six participating swim clubs and sixty-six swimmers in total, ranging from about 5 years old up to age 17.

Quite a number of the competitors came over from St. Kitts.

The swimmers were placed into their respective age categories for the elimination races, which commenced at 10 am and concluded at around 12 noon.

The swimmers took a break for lunch and the grand finals commenced at 2 pm when the athletes with the best times, faced off for the top three places.

It was a fun and family day, with music provided by Jazzique and T Liburd; food from BIG SIX and Rosie’s patties and potable water from ESP WATER SOLUTIONS. 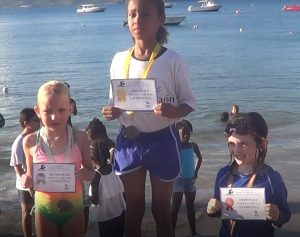 Running commentary was provided by T Liburd and later the Minister of Sports, Hon. Eric Evelyn, who also assisted with the presentation ceremony.

The grand trophy for the winning team on the day was not presented, as based on the lengthy tabulation of points, two teams were tied in the first place: BLUE MARLIN and BRING IT.

The organizers indicated that the points will be rechecked again before a final determination of the overall winning team, is made.