BASSETERRE, ST. KITTS (July 12th, 2013) – Following a very successful island wide 4G launch in both St. Kitts & Nevis, Digicel is at it again with an exciting & rewarding promotion for summer. Over the next six weeks, Digicel customers will be winning $1,000 CASH EVERY DAY in Digicel’s 4G 30 Days of Summer Promotion. During this promotion, which promises to be the hottest thing this summer, a total of 30 customers will share a cash prize of $30,000. 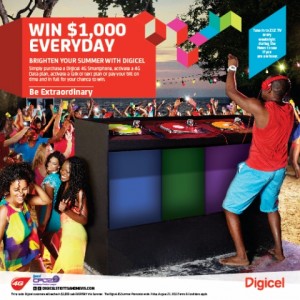 All Digicel customers both prepaid & postpaid can enjoy this promotion starting today Friday 12th July, until Friday 23rd August. To qualify, customers are encouraged to purchase any Digicel 4G handset, activate a Digicel 4G DATA Plan, an Unlimited Talk or Text Plan or pay their postpaid bill in full & on time. One lucky Digicel customer will be randomly selected nightly, Monday to Friday, and awarded $1,000. It is expected that the excitement surrounding Digicel’s 4G 30 Days of Summer Promotion will grow nightly as thousands of customers witness the LIVE announcement of the winners on two local TV stations in both St. Kitts & Nevis. Customers in St. Kitts & Nevis are encouraged to tune in nightly to ZIZ TV or Info Channel respectively, between 7:00pm & 7:30pm when the winner will be announced.

Digicel’s Chief Executive Officer, Johnny Ingle said; “We have recently built & launched the 1st island wide coverage 4G cellular network in St. Kitts & Nevis. With our summer promotion we want our customers to fully benefit from the investment we’ve made in the country while rewarding them a cash prize of $30,000.”

Digicel has also today launched its first ever Smartphone, the DL 600, making the Android experience affordable and accessible to all. The DL 600 Smartphone features a large 3.5 inch display, the latest version of the popular Android OS (Jellybean 4.1), a 1Ghz processor and an aesthetically appealing and fresh design. This weekend, customers can be one of the first in St. Kitts & Nevis to own the first ever Digicel Smartphone at a discounted price of $199 for postpaid customers or $299 for prepaid customers. With the purchase of this handset, all customers will receive FREE 4G DATA.