BASSETERRE, ST. KITTS, AUGUST 26TH 2013 (CUOPM) – The Caribbean destination of St. Kitts is being highlighted in Brighton, England, this August Bank Holiday as part of a British Airways #BABeachside extravaganza that offers visitors a chance to win a unique and very special ‘dine in the sky’ experience.
The six-day beachside event, which showcases one participating British Airways destination per day, highlights St. Kitts on Monday 26 August, when thousands of visitors are expected over the Bank Holiday weekend. 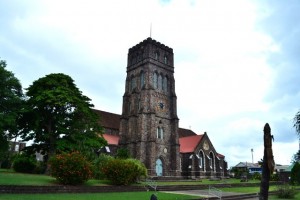 On St. Kitts Day, up to 400 promotional sticks of Brighton rock will be given out each hour by British Airways uniformed ambassadors, offering access to the British Airways and St. Kitts ‘pop up’ Beach Lounge.

For the lucky few, the sweet treat will unveil a very special prize to take a unique ‘flight’ to dine in the sky on the British Airways St. Kitts flight, where they will enjoy a delicious Caribbean menu 100ft in the air, overlooking stunning views of Brighton. The half-hour flight with 22 passengers on board will take off 11 times, hosting a total of 242 passengers throughout the day.

Up to 6,000 visitors will enjoy the best of St. Kitts hospitality with complimentary drinks, destination video, music and entertainment getting everyone in the holiday mood at the British Airways and St. Kitts ‘pop up’ Beach Lounge.

The Minister of Tourism and International Transport, Senator the Hon. Ricky Skerritt, said, “We are delighted to be part of the British Airways Dine in the Sky experience in Brighton. British Airways has once again shown amazing ingenuity in the creation of their destination promotions and we look forward to hosting the lucky diners in the sky as well as all those who visit the beach lounge. Our continued partnership with British Airways in promotions such as these is key to generating awareness of the destination and its success in the UK market.”

Colm Lacy, Head of Commercial at British Airways London Gatwick, said: “St. Kitts continues to be a popular destination for our customers who want to visit new and exciting destinations and, particularly in St. Kitts’ case, uncrowded and unspoilt. We are therefore pleased to have St. Kitts ‘on board’ once again on such an exciting promotion. Such initiatives grab consumers’ attention and are an excellent way to gain immediate visibility and awareness.”

The St. Kitts British Airways ‘Dine in the Sky’ (DITS) experience represents a tourist board first for St. Kitts Tourism Authority, one of only six destinations to participate.

The experience will be seen by an estimated quarter of a million visitors who descend on Brighton beach over the August Bank Holiday with additional presence on British Airways Facebook and homepage.
The use of social networking such as Twitter and Instragram will offer an additional promotional element via sharing and engagement.