On the premises of the newly constructed Harpers Office Depot, three Secondary Schools were recipients of office equipment for being listed in the top three schools positions of the recently held JA Company Program Trade Fair 2015. Each school was represented by two students and the JA Company Program teacher, the schools being the Charlesstown Secondary School, the Verchilds High School and the Washington Archibald High School adjudged 1st, 2nd and 3rd places respectively.
The results of the Trade Fair Competition were announced at the event for the first time, unlike previously, when the results were announced during the JA Annual Awards Ceremony which is usually held later the same year.
Harpers Office Depot being sponsors of the JA Programs, continually supports youth development within the Federation of St. Kitts and Nevis and applaud the efforts of Junior Achievement St. Kitts and Nevis (JASKN). It is hoped that the machines will help to enhance the work of the JA student companies of each wining schools.
The Board of Directors and staff of JASKN once again express sincere thanks to Harpers Office Depot for the support to and the confidence shown in the JA programs. The Organisation also again says thanks to all other sponsors and supporters and look forward to your continued support. 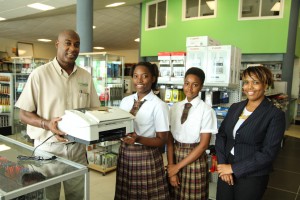 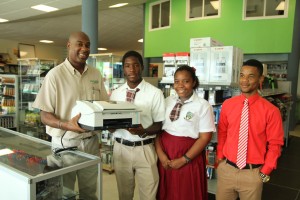 Basketball : Updates On Matches in The NABA League

West Indies Opt to Play for Draw on Final-Day Tussle