Basseterre, St. Kitts (September 30, 2013) — Cricketer Akheam Fox, a proud product of St. Kitts and Nevis, has just completed a successful English Summer Season with six centuries and three near misses, a feat that has elevated him to play in the Premier English Cricket League come next season.

On the pitch and off the pitch Akheam Fox has carried himself with dignity and humility, a trait that was observed when he briefly worked as a cashier at the Fort Street Branch of Scotia Bank in Basseterre, where many customers are missing his inborn well-polished demeanour that made them want to return to the bank to be served by him.

He has been in England since January 2012 as a student at the Oxford Brookes University where he is enrolled for a Bachelors of Arts programme in Information Technology for business applications. That is good for his personal development.

However, the manner in which he handles the bat when he is busy terrorising his English bowling opponents, and the way he carries himself off the pitch has ended up being a boon to his country, whose economy is service industry oriented, with tourism topping the list. Akheam Fox has become an unofficial tourism ambassador for his country.

During the summer of 2012 Akheam Fox provided mentorship for the two sons of Mrs Nicky Ward, who is the secretary of Abingdon Vale Cricket Club where he played cricket. Mrs Ward was so impressed with Akheam’s governing values, courtesy, humility and general mode of operation that she vowed to pay a visit to the place that produced such a well-rounded young man.

Akheam almost dismissed it, because he knew that people do not just hop on long haul flights to go to places that they do not know — it is an eight-hour flight from London Gatwick to St. Kitts. He was however pleasantly proved very wrong.

On Tuesday January 1, 2013 Mrs Ward and her two sons, Harrison and Elliott, arrived in St. Kitts as guests of Akheam’s parents, Mr David and Mrs Lynette Fox. Her eldest son enjoyed some cricket coaching in the nets with Keeth Arthurton. Akheam had travelled with them from England.

Nicky Ward, who had come to know the island that had produced an impressive person, as Akheam Fox, had other ideas too. She manages a Bridal Company in Oxfordshire and when she learnt that St. Kitts is a popular wedding destination, she connected with the Ministry of Tourism, who gladly designated Mr Dale Adams and Mr St. Clair Maynard to accompany her to visit several places of interest on St. Kitts that are considered as ideal locations for weddings.

The story provided excellent additional exposure for St. Kitts across Europe, and it is anticipated that it could assist with the increased exposure of St. Kitts as a place of choice for weddings when one takes into consideration that British Airways has two weekly flights from London Gatwick to St. Kitts. [Link to the story: www.guidesforbrides.co.uk/wedding-ideas/st.kitts-review-_cont929.html <http://www.guidesforbrides.co.uk/wedding-ideas/st.kitts-review-_cont929.html> ]

This additional exposure for St. Kitts as a wedding destination is priceless, and all thanks go to cricketer turned ambassador, Akheam Fox. The country should brace itself for additional visitors from England this winter.

In the first instalment of Akheam’s story which appeared last week, it was mentioned how he struck six centuries. It will be prudent to look at the three centuries that he almost got.

On July 17 he was 95 lbw with fourteen boundaries for Free Foresters Academy against Nigerian Senior National Cricket Team on its tour of England for the ICC World Cricket League Division Six 2013 Cup in a 45 overs a team warm up match.

Exactly ten days later on July 27 Akheam was 96 lbw for Oxford Club vs. Oxford Downs, a performance during which he was photographed for the Oxford Mail sports report and his action picture was published in the Oxford Mail newspaper of July 29, 2013.

The third near miss came on September 8 where he was 92 not out, having travelled to Northhamptonshire to appear in the final match for the 2013 season with his new club Stony Stratford vs. TrinPark. Again he impressed his new teammates when he struck fourteen boundaries to overhaul the opposition’s total of 160 and register a win for his team.

“I had a decent year,” said Akheam when asked to sum up his performance for 2013. “I benefitted greatly from the long sessions out in the middle. I know that I gained lots of confidence from being in partnership with Hugo, with his vast knowledge and with him having attended the Darren Lehman’s Academy; there were some things that I was able to learn from him.

“I took the opportunity to improve on the things Keeth Arthurton taught me. I keep remembering Keeth’s famous words ‘there is no substitute for being out there in the middle’. I have thoroughly enjoyed my batting this season, and I have developed the art of piercing the field at will, especially after making some successful adjustments as the season went along.”

Among the accolades in the 2013 season, and something that he cherishes most, was his vast improvement in fielding, which saw him receive from the Oxford Brookes University Cricket Club, ‘The fielding moment of the season award 2013’.

Akheam Fox is looking forward to the challenges of playing cricket in the English Premier League in the summer of 2014. All the people of St. Kitts and Nevis wish him the very best, both on the pitch and off the pitch. 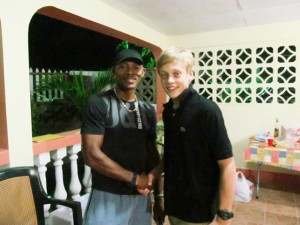 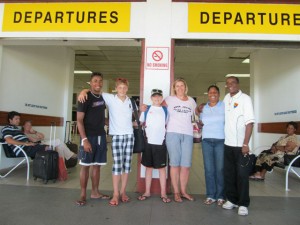