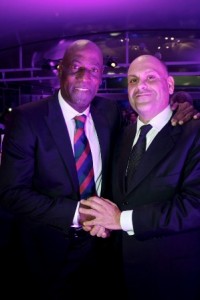 The Lord’s Taverners is one of the UK’s leading youth sports and disability charities who currently donate over £3 million pounds per year to programmes that give young people particularly those with special needs the opportunity to engage in Cricket and other sports.

All funds raised from the dinner will be split between two charities, with the Lord’s Taverners receiving 75% and with 25% going to the St John’s Cathedral Antigua Restoration Project. Sir Viv graciously accepted a cheque for a minimum agreed donation of £25,000. This cause was chosen by Sir Vivian as one that is close to his heart. The funds raised will provide a substantial contribution toward the restoration of one of the nation’s most iconic and historic landmarks.

Minister Michael remarked “I stand here this evening, overjoyed that Sir Isaac Vivian Richards is being honoured by the Lords’ Taverners. Antigua and Barbuda is a small country. Our population is less than a hundred thousand people. And, yet we have produced some of the world’s most outstanding cricketers. Each of them has been special, but all of them will readily acknowledge – as I do this evening – that Viv Richards is pre-eminent among them. It is a pre-eminence that he enjoys, as well, among cricketers from every cricketing nation in the world.”

The Tourism Minister continued “Vivian Richards gave to cricket worldwide, a standing and a following matched by only a few in the world. And, if from all that I have said, you get the impression that I, and the people of Antigua and Barbuda whom I represent, place Sir Vivian in a special category of citizen, you would be perfectly right. We have honoured him with a Knighthood and we have all – unanimously and collectively – made him one of our National Heroes. But, we know that no honour we give him, no recognition that we accord him, can repay him for the sheer joy and the absolute pride that he has brought to our small nation. Sir Vivian is a proud Antiguan who played cricket for the honour of the West Indies and for his country.”

Minister Michael concluded by thanking Sir Viv for his contribution to tourism “It is therefore with pride and pleasure that on behalf of the people of Antigua and Barbuda I’m here with you this evening to witness the great honour that is being bestowed on Sir Viv…. He may have given up his bat in Cricket, but he continues to bat for Antigua and for the West Indies. Antigua and Barbuda is a premier tourist destination today in part because Vivian Richards never let people forget that it is the county of his birth, and his home. He continues even now to promote his home, and to invite people from all over the world to come and enjoy it. The funds that will be raised for Sir Viv’s Charity, The St John’s Cathedral Restoration Fund will go a long way to restoring one of most iconic landmarks in our nation. For that most generous gesture we are most grateful.”

The officials who were in the UK for a packed session of tourism promotional meetings were on hand along with CEO of the Antigua and Barbuda Tourism Authority Colin C. James for the historic occasion.

Some of the numerous tributes paid to Sir Vivian included ones from Sir Andy Roberts, former West Indies Captain Sir Clive Lloyd, Sir Ian Botham, and broadcast legend Sir Trevor MacDonald. Stories and anecdotes from playing days were recalled by former teammates and adversaries on the field to the delight of the hundreds of high net worth patrons.

Sir Viv who was clearly moved by the tributes particularly the remarks of Minister Michael commented that. “The evening was one that I will never forget, in particular the efforts made by the Government and people of Antigua and Barbuda to recognise me in such a tangible way in the presence of my peers” I am humbled and very appreciative of what has been done in my honour.

The Sports Tourism sponsored event not only recognised Sir Viv for his contribution to the game of cricket but for his outstanding patriotism and passion for his beloved Antigua and Barbuda. Sir Viv Richards a true son of the soil uses his talents and the international stage to proudly promotes his homeland as a premier tourist destination at every opportunity that is afforded him.