Bank Of Nevis High Schools’ Championship Set For Next Weekend 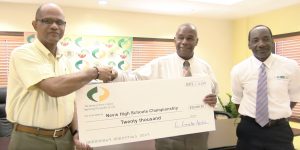 A brief but impressive ceremony was held at the Bank of Nevis on Friday 1st March.

The occasion was the launch of the 2019 edition of the revived High Schools championship on Nevis.

The Bank of Nevis, sponsored the revival event last year and is on board for the continuation of the event this year.

The ceremony was ably chaired by Director of Sports, Mr. Jamir Claxton.

Among those speaking briefly, were Marketing officer at the Bank, Mr. Pheon Jones, who noted that he was elated and ecstatic and pointed out that it is the Bank’s goal to assist in the holistic development of the nation’ youth. He revealed that the sponsorship is to the tune of $20,000.00.

Manager Everette Martin, stated that the Bank’s mantra is to improve the quality of life of the citizens of the nation and indicated that it is the intention of the institution to continue such sponsorship, well into the future.

Permanent Secretary in the Ministry of Education, Mr. Kevin Barrett, indicated that it was a big occasion and said that he was particularly enthused with the results of the collaborative efforts between his Ministry and the Department of Sports.

Also addressing the gathering was Minister of Sports, Hon. Eric Evelyn who stated that he was very pleased with the sponsorship provided by the Bank of Nevis.

Mr. Martin then officially handed over the cheque to Minister Evelyn.

In closing, Mr. Claxton named the members of the committee which is coordinating the grand event as follows: Jamir Claxton; Kevin Barrett; Shermon Caines; Kelvin Bramble; Kurvin Wallace; Ercia Blake; Vijay Harinarine and representatives from the three High schools on the island.

The events will be held at the Mondo track on Saturday 16th and Sunday 17th March, with an official opening ceremony in Charlestown on Friday March 15th which will culminate with a march of the athletes through Charlestown.