Tyson Gay felt healthy for the first time in years and was aiming high: He planned to step on the track at world championships and push Usain Bolt.

The anticipated 100-meter showdown got scrubbed after Gay, the American record holder in the event, failed a drug test for a banned substance. 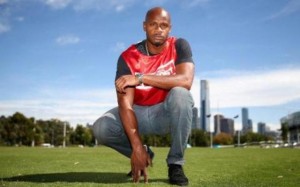 A sport that vowed it had cleaned itself up after decades of stories about disgraced, drug-fueled sprinters — Ben Johnson, Marion Jones, Tim Montgomery, to name a few — found itself in a very similar spot after this latest flurry of doping cases.

“A sad day,” said Doug Logan, the former CEO at USA Track and Field. “But I don’t see anything on the horizon that says this will be abated in any way.”

Gay chose to withdraw from next month’s world championships while his case plays out; the next step is a test of his “B” sample, which could come as early as this week. Simpson’s and Powell’s status remains in limbo. Simpson was eligible for the 100, while Powell was waiting to see if he’d make the relay team.

“Will this be a cloud over (worlds)? I think it would be naive to say otherwise,” said Ato Boldon, a four-time Olympic medalist and sprint analyst. “I sat down and thought about the events I’m looking forward to. There are people who are not there, for all the wrong reasons. …”

Long considered a nonconforming pot-stirrer, Logan recently wrote a column arguing that the fight against performance-enhancing drugs in sports should be surrendered because, in his view, anti-doping rules make very little headway against a problem that never seems to disappear. He said Sunday’s onslaught of failed tests only bolstered his point.

“People ought to open up their eyes and see that there’s very little we’re doing that is keeping those who are motivated to use the substances from using them,” Logan said.

“I am not now — nor have I ever been — a cheat,” Powell said on his Twitter account.

The 30-year-old sprinter, whose 100-meter record of 9.74 seconds stood until Jamaican teammate Bolt beat it in 2008, was calling for an investigation as to how a stimulant called oxilofrine entered his system and caused a positive test at Jamaica’s national championships in June.

Simpson, who tested positive for the same stimulant, said she “would not intentionally take an illegal substance of any form into my system.”

Gay was healthy again this season after being plagued by hamstring and groin ailments, along with a bad hip that required surgery.

He conceded this news would be tough for his fans.

“My reputation,” Gay said, “has always been honest.”

The 30-year-old, who won the world championship in the 100, 200 and 4×100 relay in 2007, took part in the U.S. Anti-Doping Agency’s “My Victory” program — in which athletes volunteer for enhanced testing to prove they’re clean — and his results never raised red flags.

That changed after results of an out-of-competition test on May 16 came back positive. Neither Gay nor USADA CEO Travis Tygart would identify the banned substance.

Generally, first-time offenders are hit with two-year bans, though reduced penalties are sometimes given if there are extenuating circumstances, which both Gay and his coach, Lance Brauman, said there were.

“He mentioned that he (trusted) someone and that person was untrustworthy at the end the day,” Brauman told The Associated Press in a phone interview. “Maybe I’m naive, but I believe him.”

Max Siegel, the CEO of USA Track and Field, said in a statement: “It is not the news anyone wanted to hear, at any time, about any athlete.” He said he looked to USADA to handle the case “appropriately.”

While Gay’s case gets sorted out on U.S. turf, the positives recorded by Powell and Simpson are part of a bigger doping crisis hitting Jamaica, the home of Bolt and the country that has won 28 medals over the last three Olympics.

In Sunday’s editions, The Gleaner newspaper of Jamaica reported that five athletes had tested positive. Paul Doyle, the agent who represents Powell and Simpson, confirmed to the AP that his sprinters were among them. Shortly after Doyle’s confirmation, Powell and Simpson each released statements acknowledging the positive tests.

The news stirred up angst on the island, where success on the track is a point of pride, but the rigor of the country’s anti-doping program is under constant scrutiny.

“This does not augur well for track and field globally,” said Rashalee Mitchell, a 29-year-old assistant social sciences lecturer at Jamaica’s campus of the University of the West Indies. “It is fast serving to taint … our proud and long-standing reputation of producing strong, excellent, raw, homegrown talent that has excelled on the world stage without any drug-related enhancement.”

The news came a month after another Jamaican Olympic gold medalist, Veronica Campbell-Brown, tested positive for a banned diuretic.

Campbell-Brown is being suspended while a disciplinary panel reviews her case. Track’s governing body said the case appeared to involve a “lesser” offense, which could mean a reduced sentence for the 200-meter champion at the 2004 and 2008 Olympics.

Shortly after news of Campbell-Brown’s positives, her agent, Claude Bryan, said his client is not a cheat and she does not accept “guilt of willfully taking a banned substance.”

Turns out, she’s not the only one making that claim during what is turning into another summer of discontent for track and field.

“The one thing I am proud of is, unlike other sports, we have quite a good record, of no matter how big you are, you can get busted if you’re not doing things the right way, according to the rules,” Boldon said. “This is not a sport where if you’re a big name, necessarily, you’re protected.”