Bill Clinton thanks PM Douglas for friendship and service to St. Kitts and Nevis 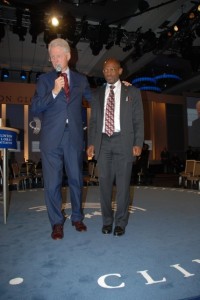 President Clinton in a letter dated October 22nd 2013 also thanked Prime Minister Douglas for his friendship with him and Dr. Douglas’ service to St. Kitts and Nevis and the World.

“Thanks so much for coming to CGI, and joining me on stage during the Closing Plenary. I’m grateful I had the opportunity to share with all of our members what a profound role you’ve played in the direction of my work over these last eleven years.

I deeply appreciate your friendship, and your continued service to your country and our world. Until I see you again, please accept my very best wishes,” Bill Clinton said.

The former U.S. president credits Prime Minister Douglas for initiating the availability of low cost anti-retro-viral drugs to HIV/AIDS around the world.

The St. Kitts and Nevis leader who attended the closing session of the annual Clinton Global in New York in September received a resounding round of applause when asked by President Clinton to join him on the stage.

“I also want to thank my great friend, Prime Minister of St. Kitts and Nevis Dr. Denzil Douglas for being here. Now for all of you starting on your commitments, this man caused me a lot of trouble,” said Mr. Clinton to hundreds in the audience which included his wife, former Secretary of State, the Hon. Hilary Clinton and daughter, Chelsea Clinton

Mr. Clinton noted that during his tenure as United States President, he had paid more attention to the Caribbean and Central America than any other American President had done in decades.

“So I leave office and in 2002, (former South African President His Excellency) Nelson Mandela and I were invited to close the International AIDS Conference in Barcelona, (Spain), Mr. Clinton recalled.

“We had like ten (10) employees in the Clinton Foundation. It was nothing compared to the 1300 people we have today,” he added.

“So Denzil comes up to me and says what I already know and that is the Caribbean had the second fastest growing rates of AIDS in the World. And that he was in charge of dealing with this because he was a doctor; and he looked at me after Mandela and I had given all of our high flown rhetoric, and he said ‘look Bill, we don’t have a denial problem, we don’t have a stigma problem, we have a money problem and an organization problem.’ Then I said ‘Denzil, what do you want me to do about it?’ And he looked at me and said ‘I want you to fix it!’ And like a fool, I said ‘okay.’ It was my CGI moment; I had no idea what we going to do,” Clinton said to the audience with his hand on the shoulder of Prime Minister Douglas.

“Okay fast forward, now we are providing the least expensive drugs to people, ARV drugs in 70 countries. More than 5 million people get medicine off of our contracts, thanks to the French Airline Tax and a programme called UNITAID, our (Clinton) Foundation is able to provide life saving medicine for 75% of the children on earth that are kept alive by AIDS medicine, all because of this crazy conversation I had with an old friend that I had just ran into,” said the former US president.

Mr. Clinton added: “I had no earthly idea that all the things that have unfolded in the last 11 years would have happened, but I am profoundly grateful for it and I owe it all to him (Prime Minister Douglas.”