The Naomi’s preschool, held its annual sports meet on Wednesday 13th March, at the St. Thomas’ Primary school’s grounds.
The meet was held under the patronage of Mr. and Mrs. Oris Greene.
The march past was the first order of business and then the little athletes received words of encouragement from the patrons.
Then it was exciting action on the track.
To the delight of the sizeable crowd, they competed in flat races; socks and shoes; fill the bottle; dress up race; tyre races and more.
When the calculations were completed, Blue house was announced as the comprehensive champions.
Final points: 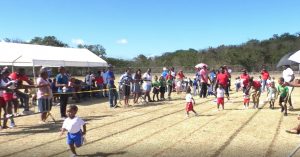