(CHARLESTOWN,NEVIS)- With a recent upsurge in criminal activity being experienced here on Nevis, all is not lost where the island’s young men are concerned. At least one community continues to benefit from an initiative that was launched in 2009 in an attempt to prevent young males from becoming involved in crime and criminality.

The Hanley’s Road based Boys Together For Change (BTFC) group which is celebrating its 5th anniversary continues to make a positive impact on the lives of its members.

As part of its 5th anniversary observance, the group worshipped at the Charlestown Weslyan Holiness Church on Sunday, June 1, 2014. A presentation of a fruit basket was then made to Bucks Hill resident Mr. Alfred “Lyn” Hobson, the oldest resident of the Hanley’s Road community.

Since the start of the programme, the young men have e been exposed to numerous subject areas including Gang Violence, Anger Management, Communication Techniques, Health and Wellness, Sexually Transmitted Disease and the Effects of Drugs on the Body.

The group meets once per month at the Charles Walters Community Center in Hanleys Road. 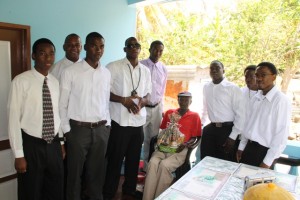 The Boys Together For Change (BTFC) programme targets boys of Secondary School age and above. It caters to the holistic development of the members and the organizers are hoping that through the initiative the community can remain gang and crime free.

The initiative is part of the outreach programme of the Empire Sports Club and is co-ordinated by club President Mr. Eric Evelyn.