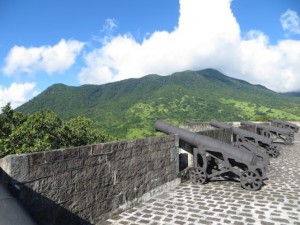 CJ writes: IT TOWERS above the tiny twin-island federation of St. Kitts and Nevis — and the majestic Brimstone Hill Fortress is one of the historical treasures of the Caribbean.

St. Kitts and Nevis, the smallest sovereign state in the Americas, is celebrating its 30th anniversary of independence this year, and Brimstone Hill is a monument to a more than four centuries of Caribbean history.

It was held over the years by both the French and the British, until being abandoned in the mid-19th century.

The fortress, located on the northwestern coast of St. Kitts, was built over a nearly 100-year period beginning at the end of the 17th century, and is one of the best-preserved forts of its type in the Western Hemisphere.

Our latest Caribbean photo tour takes you through Brimstone Hill and some of the best vistas in the region.