As the folks trickled into the ET Willet Park on the afternoon of Wednesday 3rd April, no one could have imagined the excitement that was in store.

It was the day of the grand Inter Primary Schools’ athletic championships, dubbed appropriately as ‘the mini Olympics. 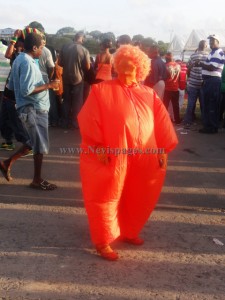 There were a couple of standout features on the big day, starting with prayer by Dr. Canon Allison Percival. This was followed by a lovely rendition of the national anthem by Brianna Browne of the Gingerland Primary School.

Premier Vance Amory paid special tribute to the continued significant contributions of sponsors GULF INSURANCE and encouraged the athletes to strive for excellence. NAAA chief, Lester Blackett paid tribute by way of a minute’s silence to the contributions of the late Neville Teddy Mc Cook and challenged Premier Amory and his administration to make his dream of an all weather synthetic track for Nevis, a reality. There are only two more years remaining since he issued the challenge.

Managing Director of Gulf Insurance Head office, Mr. John Gonzales also made brief remarks during which he saluted the work ethics of Mr. Arthur Evelyn and his Nevis office.

Former champion athlete and patron for the prestigious event, Trevier Smithen was eloquent in his delivery as he encouraged the athletes to do their best and officially declared the meet open.
There was also a significant presentation of plaques to the coaches of the various schools for their contributions to the meet’s success.

Then the combination of Patricia Claxton and Jean Caines entertained in traditional style, this time in their inflatable orange outfits which turned quite a few heads.

On the track, the athletes demonstrated superlative, sometimes super human efforts as they all battled to bring glory to their respective schools.

In the 100 meters, Kevally Browne of JLPS defeated the outstanding Kurvella Wallace in one of the races of the day. In another race, Imani Browne of St.Thomas’ Primary was leading the pack in the 100 meters event by the proverbial mile, when he suddenly stopped. The other athletes closed in on him and he proceeded to run again, only to end up in a close and controversial photo finish for first place.

When quizzed about his unusual action, he responded: ‘it sound like somebody had say go back.’
The officials in their wisdom decided to run the race again and again the youngster left his competitors in the dust—this time without pausing for a heartbeat.

The scores came at irregular intervals but it is understood that after the penultimate race, both the defending champions St.Thomas’ and Charlestown Primary were tied jointly on points, with the final 4 X 400 meters event, the last for the day, to be the deciding race. Charlestown Primary took gold in the race, with St.Thomas’ a distant second and thus ensuring victory for the CPS team by the slenderest of margins—one point!! As is common in any electoral process when the vote counts are close, there was apparently a recount but the final point standings were confirmed as follows:

The Charlestown Primary contingent broke into a victory lap around the Park and the EPPS team was equally ecstatic.

Despite the controversies, most persons would admit that they would have had more than their money’s worth on the big day.