Charlestown-Nevis- Sports Officers, Coaches and Physical Education Teachers from across the island, assembled at the St. Paul’s Anglican Church conference room, on Thursday 19th November.
They all showed up to be a part of a very important workshop, focusing on child protection.
The workshop was jointly hosted by the West Indies Cricket Board (WICB); the Bank of Nova Scotia and UNICEF.
During the brief opening ceremony which was held prior to the classroom sessions, Mr. Junie Mtchum, Leeward Islands Territorial Development officer, indicated that it was part of the mandate of the WICB that all coaches and individuals who are responsible for the training of children, must be so qualified through the child protection workshop, which will entitle them to a certificate which can be utilized throughout the region.
Also addressing the gathering was Ms. Ebony Harp, Branch Manager of the Bank of Nova Scotia in Nevis. She stated that she was pleased with the fact that her institution could be a part of such a significant workshop and pledged its continued support in similar endeavours.
In the absence of Director of the Social Services department, Mrs. Sandra Maynard, Miss Anesta Maynard represented that department.
She indicated that even though strides have been made in reducing the incidents of child sexual abuse, there is a lot more work to be done in this regard. She stated that over the last few years, over 80 cases of child sexual abuse have been dealt with by her department. Not all of them went to court.
She urged the participants present to report any cases that even seem to be cases of child sexual abuse, as it is better to have the cases investigated and there is nothing to it, than it not be investigated and something is going on.
She told the participants that due to the fact that they work with children, they are ‘mandatory reporters.’
She commended the WICB, Bank of Nova Scotia and UNICEF for making the training available to the participants.
Miss Zahnela Claxton, Youth Coordinator at the Youth and Sports Department, also added her voce to the proceedings.
She noted that the workshop promotes and embodies what her department is trying to emphasize as one of the pillars of success for the youths.
She also congratulated the Education and Social Services departments for the work they are doing towards the protection of children.
She stated that the participants will not only be able to identify signs of sexual abuse but be also equipped to deal with such situations.
She asked them to ‘embrace the experience and learn as much as you can…..so that in the long run, our children can not only feel safe, but be safe.’ 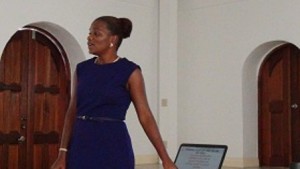 Minister of Foreign Affairs meets with Scholarship Recipients in Havana