Charlestown –Nevis- A horrific collision between two vehicles, this morning, has left one person hospitalized and apparently severely injured. 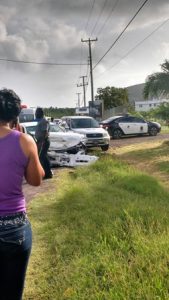 The crash took place at Cades bay, next to the entrance to the Sea bridge ferry service at some time after 7 am today.
The drivers of the two vehicles were not properly identified but a female was driving the RAV 4 and a male was driving the other vehicle.
The male was seen on the scene, almost in a daze and obviously perturbed, before he was driven away in a police vehicle.
The female on the other hand, though fully conscious and talking, was removed by paramedics from her vehicle and transported to the Alexandra hospital.
One person who was on the scene indicated that her feet were swollen and apparently broken and she was in obvious pain.