(CHARLESTOWN, NEVIS)- “It’s something new every day” says Her Honor, Yasmine Clarke after Robert Tyson of Cotton Ground attempted to steal back his cannabis from police officers while in police custody. 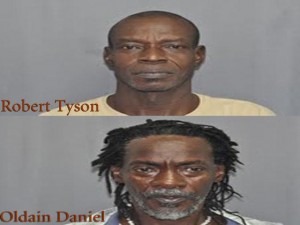 Tyson pleaded not guilty to the charge of possession to supply to another and as a result Police Prosecutor, Inspector Trevor Mills withdrew the charge but presented the facts to the court for the other two charges.

The Inspector stated that on April 2, 2013 at about 6:30 p.m. Constable Monthana Mathias executed a search warrant on the premises of the defendant. While searching Tyson’s bedroom the officer found five transparent bags containing cannabis in a corner next to his bed. Mathias then proceeded to search outside of the house where he found eight cannabis plants growing in the yard.

The accused was arrested and taken into police custody. Then what must have been a first time occurrence at the police station took place in the presence of the police. The Inspector stated that while Constable Mathias was weighing the drug at the station in front of the defendant, Tyson was seen by the officer taking one of the bags and putting it into his pants pocket. In effect he stole back the marijuana from the police. He was searched and the drug was retrieved.

When it was his time to address the court Tyson stated that he is sick and he uses the cannabis for medical purposes. To this Her Honor, Magistrate Clarke told the defendant that it is against the law to have cannabis in his possession and if he is sick, he should let the doctors prescribe medication for him.

He further stated that the weed is not to smoke but to drink and for him to bathe. Tyson indicated that he was born a sickly child in 1962 and from that time an individual gave his mother a remedy with a mixture of bush for him to bathe. Tyson insinuated the bath time concoction contained marijuana. To this Her Honor stated, ‘I don’t believe anything is wrong with you. You would need to find another type of bush to wash your skin’.

Additionally, Oldain Daniel of Cotton Ground was fined $500.00 to be paid in three months or in default serve one month at Her Majesty Prison for possession of cannabis.

Daniel made no comments in court.