The youths of the Kittitian and Nevisian Diaspora took front stage on Friday April 22, 2016 at the St. Kitts and Nevis Soccer Graduates Club (SKNSGC) 12thAnnual Gala, held at the Eastwood Manor in the Bronx New York.
Deputy Prime Minister and Minister of Education, Youth, Sports and Culture was the guest speaker for the event which was very well attended by friends and supporters of the SKNSGC, as well as family members of the sports honorees. 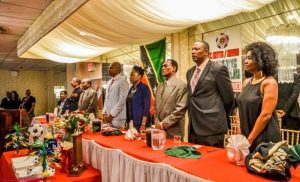 During his brief remarks, Deputy Prime Minister and Minister of Sports the Honorable Shawn K. Richards encouraged the young soccer players to continue to rise to the occasion during their soccer tenure. He further encouraged them to embrace academic opportunities provided for them as well. Minister Richards spoke to the fact that he was pleased to see young people so actively involved in the process of sports development in the Diaspora and doing so under the banner of the Federation of St. Kitts and Nevis. He expressed heartfelt congratulations to the SKNSGC to have endured over two dozen years seeking to expose young men to football and to assist in opportunities that can make their life away from their homeland productive.
Ambassador of St. Kitts and Nevis to the United States of America Her Excellency Dr. Thelma P. Phillip-Browne was also in attendance to introduce the Deputy Prime Minister and to bring words of encouragement to the players. Her Excellency also commended the night’s honorees for their contribution to sports and youth development in the Federation of St. Kitts and Nevis and expressed gratitude for their contributions as sportsmen and mentors to the nation’s youths.
The organizers of the event used the opportunity to honor two of the Federation’s renowned sportsmen, namely Mr. Trevor Isaac and Mr. Ingleton Liburd whose vast contributions to national development through sports, is etched in the history books of St. Kitts and Nevis for generations to come. Both Isaac and Liburd were dominant sports figures in the Federation for a number of years. Isaac, who hails from the town of Cayon, excelled in cricket and football at a very early age. He was instrumental in helping Cayon garner dominance in the football during the 70’s and early 80’s.
Meanwhile, Ingleton Liburd, who grew up in Basseterre and played football and cricket but was dominant in cricket. In fact, he rose to prominence in that field as a national player. After relocation to Canada, Liburd’s wealth of talent in the sport won him a regular spot on the Canadian cricket team, which he later captained for several years.
In a show of unwavering patriotism, both men returned to the Federation to serve in various capacities after their relocation. Isaac returned to bolster his local football team and to share his wealth of knowledge and the love of football with young people and Liburd returned to St. Kitts to assist in managing the Len Harris Cricket Academy. Both men have proven their value as sportsmen who continue to give of their time even after their glory days as sportsmen has past.
The executive members of the St. Kitts and Nevis Soccer Graduates Club expressed their sincere commendations to both Trevor Isaac and Ingleton Liburd who have been notable sports Ambassadors for the twin island paradise of St. Kitts and Nevis and the epitome of the nation’s motto of “Country Above Self.”
The most reverend Canon Calvin Mcintyre invoked God’s blessings on the evening’s proceedings after which he served up chunks of tear jerking laughter with his straight faced satire, creating a jovial and fun filled mood throughout the night’s proceedings.
Several of the young players from the 2015 Caribbean Cup League were recognized for their outstanding performance during the closely contested competition. The St. Kitts and Nevis Soccer Graduates Club placed 3rd in that tournament. Of notable mention is the fact that a few of the young athletes who played in last year’s tournamen were able to secure scholarships to attend college as a result of their success in the sport.
President of the SKNSGC Mr. Pelham “Plumb” Warner shared with the audience that the successes of the football club were in part as a result of the alliance with the 2015 coaching staff led by Roy Charles with the assistance of Maurice Dasent, Aubrey Williams and Ackish Ible. Most importantly, the commitment to success exhibited by all of the players made for an extremely strong showing of the team in the well contested 2015 tournament.
A hearty dinner was served to the guests who were also treated to a lively catalogue of music by Sopy Don and his Eternity Sounds. A raffle and door prizes made winners out of several of the night’s attendees.
Members of the SKNSGC and organizers of the event expressed their appreciation to all who supported and attended the event. A schedule of the 2016 tournament is available from members of the executive or players.