BASSETERRE, ST. KITTS, JANUARY 1ST 2015 (CUOPM) – St. Kitts and Nevis’ Prime Minister the Rt. Hon. Dr. Denzil L. Douglas says the spirit of hope and optimism that pervades the society is founded on a record of solid performance in virtually all aspects of the social and economic life of the twin-island Federation. 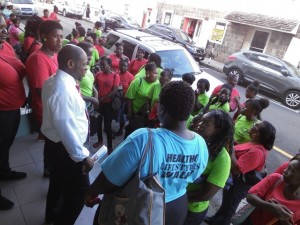 “It is based on the confidence of our people in the ability of the Government, through effective and creative policies, to continuously engineer real progress, real change. Our economy, like all other Caribbean economies, was pushed into a recession by the global financial crisis that started in the housing market in the USA in 2008. But we are among the first to recover, having achieved significant economic expansion in 2013 and again in 2014. Indeed by nearly all measures of economic performance, we are the top performer in the OECS and in many instances, in the Caribbean as a whole,” Dr. Douglas said in his New Year address to the nation.

He noted that St. Kitts and Nevis is Number One in economic growth, having achieved, in 2013, a growth rate of 3.8 percent which is higher than in any other OECS country; and having accelerated that pace of growth to achieve an estimated growth rate of 4.6% in 2014.

Dr. Douglas told nationals that this level of performance in economic growth is better than in any of the developed countries listed as advanced countries in the World Economic Outlook.

“We are # 1 in debt management, having achieved the almost impossible feat of reducing our public debt by EC$1.1 billion from 147 percent of GDP to 83 percent of GDP in some 3 years. We are #1 in relation to the external account, having achieved an overall balance of payments surplus of some 7.8 percent of GDP, which is higher than in any country in the Caribbean. We are # 1 in fiscal performance having achieved a primary surplus of EC$317.1 million or 15.2 percent of GDP and an overall surplus on the fiscal account of EC$252.6 million or 12.1 percent of GDP. No Caribbean Country, and indeed none of the advanced countries, comes close to this level of fiscal performance. We are # 1 in the OECS in Foreign Direct Investment, #1 in the value of exports and services to the United States in the OECS, #1 in cell phone ownership per capita, and # 1 in the percentage of our population that enjoys broadband internet access,” said Dr. Douglas, in his 20th New Year’s Address as Prime Minister.

He said that the performance of St. Kitts and Nevis in social development is just as impressive.

“We have progressively moved our minimum wage so that it is now the highest in the Eastern Caribbean. We have distributed more houses per capita than any other Caribbean country. We have helped our people to shed the label of landlessness by implementing a massive land distribution programme that made it possible for every person who did not previously own real estate, to become a landowner. We are perhaps the only country in the world that has provided every secondary school child a laptop computer thereby levelling the playing field in our schools such that rich and poor alike have access to the latest learning technologies and are given to the opportunity to reach for the highest levels of academic excellence,” said Prime Minister Douglas, who added that the People Empowerment Programme (PEP) has delivered many of the young people from the despair and hopelessness that the Global Recession brought to young peoplewho bore a disproportionate share of the burden of unemployment and economic malaise in countries all over the world.

Prime Minister Douglas said it is therefore not surprising that other countries have sought to copy this most creative programme that has generated income for the young people, has provided them valuable training and experience, and has given them the opportunity to secure a permanent place in the workplace for themselves.

“This small sample of social initiatives that I have mentioned is part of a comprehensive social and economic development programme that has helped to empower people in our various communities, generate wealth and income for all of our nationals, and root out poverty and deprivation,” said Dr. Douglas.