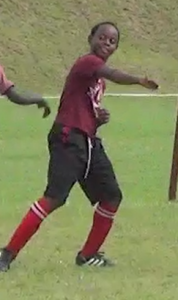 Well, we have not been hearing much about him in recent times and that is simply due to the fact that he has relocated to Trinidad.
Just last week, the young man grabbed the spotlight there, in a huge way.
Playing Cricket for the Diego Martin Secondary School versus the St. Mary’s College team, D’Mari smashed his way to an unbeaten 266 not out and hit 24 sixes and 17 fours in the process.
His team racked up a humongous 355 for 3 and bowled out the St. Mary’s team for a mere 61 runs.
In achieving the huge score, D’Mari broke records previously established by the following players:
St. Mary’s Keith Elder 199 runs
Tranquility Government Secondary –Shawn KirdHarry-205 not out
Samuel Felix-210 not out
Tion Webster 215
Brian Lara -244 runs
Camillio Carimbocas 245 not out
By the look of things, we will be hearing a lot more form the young man, in the not too distant future.