(CHARLESTOWN, NEVIS) – Reports reaching this media house indicates that a Gingerland resident has become the latest victim of gun violence on the island of Nevis. The incident is said to have happened sometime during the early morning hours of Saturday, May 2, 2015.

Nevispages understands that about 12: 35 a.m. on Saturday,Taj Taylor of Meades Pasture, Gingerland was attacked by three masked gunmen in the Westbury area.

Information is still sketchy but according to unconfirmed reports Taylor had just picked up a certain female in the area when he was attacked.

The gunmen fired a number of shots at the vehicle striking Taylor in both legs. It is alleged that his left leg was broken.

Moments after the incident, the shooting victim posted on his Facebook page ‘was just shot’. He also posted pictures of what appeared to be a bullet wound on his leg.

The victim is is currently on trial at the Charlestown High Court.

This shooting incident comes two weeks after the shooting death of Everette Hanley, who was gunned down outside of his home in Hamilton, Nevis.

Police are investigating both matters. 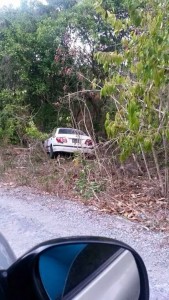