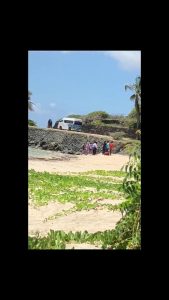 According to a source, 72-year-old Gregory Dean Vematsu of Caledonia went snorkeling with his wife Patricia Vematsu at Banana Beach, when he told his wife that he wants to go to shore.

While going to shore he reportedly disappeared and his wife then saw him float to the top of the water after several minutes of searching.

A medical doctor went to the scene and pronounced Gregory Vematsu dead.

An autopsy has been ordered to determine the exact cause of death. It is to be performed on Friday morning.