(CHARLESTOWN, NEVIS)- After twenty years without a pageant win, the Elizabeth Pemberton Primary School formerly known as St. Johns Primary School had the sweet taste of victory when it triumphed over all the other contending schools in this year’s Mr. and Miss Talented Youth Pageant 2013. 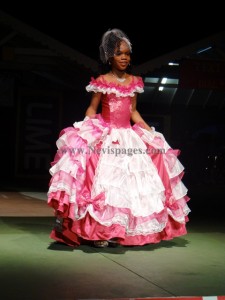 Najida Walters of the Joycelyn Liburd Primary School placed 1st Runner Up. She was sponsored by Builders Paradise, St. Kitts.

This year’s winners were crowned by reigning King and Queen of the Charlestown Primary School and Nevis’ Culturama Queen 2012-2013, Miss Denesia Smithen.