In what was described as a fun filled, patriotic weekend, the Embassy of Saint Christopher and Nevis in the Republic of China Taiwan hosted a bike riding activity, dinner and Church Service for students and nationals residing in Taiwan, in celebration of the thirty second anniversary of the Independence of the nation.

On Independence Day, twenty-seven students boarded a bus that took them to Bali, in Taipei where they embarked on a leisurely bike ride along the Danshui River.  The tandem bike ride that accommodated four persons per bike was a first for many of the students, and provided picturesque scenes with riverside views of the towns of Danshui and Bali.  In welcoming the students to the event, H.E. Jasmine Huggins reminded students that “were it not for our Independence thirty two years ago and the resulting bilateral relationship very soon after with the Republic of China (Taiwan) many of us may not have been here today, so we must pay homage to our visionary leaders who through their wisdom and foresight allowed us to have this moment.”

Following the bike ride, everyone feasted on indigenous food at the famous Badasan Aboriginal restaurant.  Although similar to Chinese food, the Aborigines utilize natural ingredients and different methods for cooking their foods.   During the dinner, the students took to the stage to sing and perform “Three little Birds” and “One Love” by Bob Marley, much to the delight of patrons at the restaurant, while others joined in an aboriginal dance along with other diners.

The independence celebrations continued the next day at a Church Service at the Church of the Good Shepherd in Taipei where officials from the Ministry of Foreign Affairs of Taiwan, diplomats, students and well-wishers turned out in large numbers for a service of thanksgiving.  A choir comprising of students of the Federation sang “Sound the Trumpet” and Mr. Stephen Richards provided the tropical flavor with a steelpan rendition of a medley of Caribbean gospel songs.  After the service, many in the congregation revealed that they were greatly moved by the choir, while others made repeated requests for additional steelpan music.

In her remarks during the service, Ambassador Huggins stated, “we cherish our twin island paradise…brought together by external circumstances, kept together by the love and will of a people that say we are better and stronger together, forging a common purpose.”   In expressing gratitude to Taiwan for their long standing support, Ambassador Huggins added “Our friends and partners, particularly the Republic of China (Taiwan) have all played critical and pivotal roles in the success of our development…Their goodwill and generosity have impacted the lives of so many in meaningful and substantive ways and with God’s help we will continue to pursue paths that would consecrate our future as we continue on the upward trajectory of nationhood and nation building ”

H.E. Simon Ko, Deputy Ministry of Foreign Affairs of the Republic of China (Taiwan) spoke on behalf of the government and echoed the observation made by Ambassador Huggins when he stated that because of the bilateral relationship between Taiwan and Saint Kitts and Nevis, the scholarship program provided the opportunity for the students to be present in Taiwan to sing and perform beautifully at the Independence Church Service.  Deputy Minister Ko also spoke of the similarities between the two countries and the deep and steady relations that exist between the Federation and Taiwan and expressed his hope that God would preserve Saint Kitts and Nevis long into the future.  Following the service the Embassy hosted a brunch that was enjoyed by the congregation. 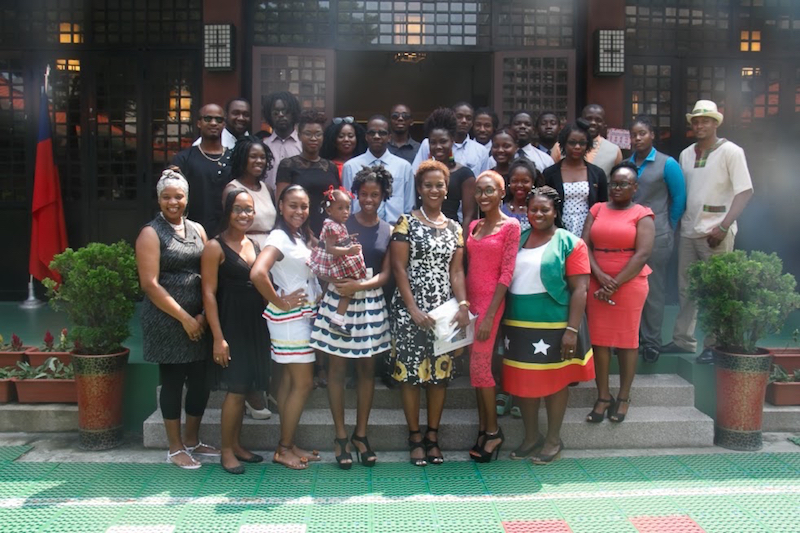