It was a virtual ‘no contest’ on Sunday 24th March at the ET Willet Park, as the Empire team engaged the Brown Hill team, as the one day 1st division competition continued. 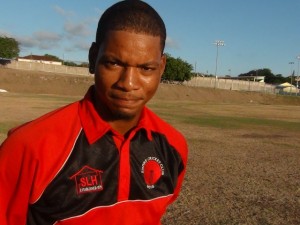 The Empire team was boosted with the appearance of West Indies opener, Kieran Powell who had only just returned from his recent exploits in the West Indies versus Zimbabwe series. In a post match interview, he noted that he had really intended to take a rest but after he got the call from Joel Simmonds, he responded.

Empire batted first and amassed a healthy 246 for 3 from their allotted 35 overs. Kieran Powell top scored with a steady 67 not out; Wasim Mintos slammed 49; Lornel Dore scored 40; Andre Browne 32 and Captain Adelvin Phillip was 20 not out at the end.

For the Bronx men, Kejel Tyson and D. Cornelius each secured 1 wicket for 37 runs.

When the Bronx men batted, they were soon in hopeless mire, as wickets fell at frequent intervals. The stand out batsman was Dave Parris who rode his luck to be 29 not out at the close. Kejel Tyson contributed 12. Brown Hill was bowled out for a paltry 71 in 20 overs.

Tevin Nisbett for the Empire team enjoyed his first five fer at the first division level, securing 5 for 19 from 7 overs. Adelvin Phillip got 2 for 19 and Lornel Dore wrapped up the innings with his 1 for 15. Empire winning by all of 175 runs.

Kieran Powell was also pleased with the showing of his team and congratulated the young players especially for ‘putting up their hands and contributing so well,’ to the team’s success.

Tevin Nisbett for his part was elated with his five wicket haul and noted that he was aiming to be included in the Leeward Islands under 19 team for this year’s WICB regional under 19 competition and pointed out that he also has his sights well and truly set on breaking into the Nevis senior team, this year as well.

Lornel Dore who is back after an extended absence from the game mainly due to an injury, thanked God for his recovery and stated that he was about 60% back to the top of his game and even though he is now over the age for the under 19 tournament, the former Leeward Islands under 19 player indicated that he intends to make a lot of runs and get a lot of wickets towards his goal of making it into the senior Nevis team this year.