Basseterre, St. Kitts, May 27, 2014 (SKNIS): The Farm to Fork Project has increased efforts to ensure that the message of growing food locally and healthy eating is reaching the public of St. Kitts and Nevis.

Farm to Fork is a collaborative effort between the Federal Government of St. Kitts and Nevis and CARICOM that commenced in March 2011 as a multi-sectoral approach to dealing with food and nutrition security as well as health concerns, specifically non-communicable diseases (NCDs), that arise from poor nutrition.

The Farm to Fork awareness campaign commenced with a display board at the Ministry of Agriculture’s Open Day, held April 24 and 25, 2014. Raymond Guishard, a field technician who works directly with the Farm to Fork programme, reflected on the event.

“I think it went very well because people got to know what we are doing,” Mr. Guishard emphasized. “I don’t think that we previously had had that public awareness about what the project entails, what it’s all about and what we are seeking to achieve. The display part of the Open Day helped people to recognize other aspects of agriculture and agencies working with the Ministry and Department to make the lives of farmers and individuals better.”

The nutrition aspect was also key to the messages that were being delivered.

“I think throughout the entire Caribbean most of our governments are now recognizing the problems we have with non-communicable diseases and a lot of it is associated with nutrition,” Mr. Guishard stressed. “The project helped to overall, approach that – seeking to do something about it. Looking at how we could eat better, eat healthier – and most of the students, even many of the adults who came by were concerned about that.”

Mr. Guishard also specified the farming aspect of the progrmme.

“In fact most of the pictures that were there, helped people to see how it’s [Farm to Fork Programme] impacting farmers, whether they are into livestock or crops,” Mr. Guishard noted. “They saw the persons we work with, some of the technologies involved, as well as the new technologies and skills being brought to the farmers. Some of the farmers had never really used irrigation before and when it was introduced to them as part of the Caribbean Food Security Project, they were able to produce crops in quantities that they had never done before.”

At the Agriculture Open Day the Farm to Fork Display Board was also manned by Dexter Adams Farm to Fork Field Technician and Sr. Information Officer Alecia Blake of the St. Kitts and Nevis Information Service (SKNIS). Fun puzzles for the children, fact sheets for adults and Farm to Fork posters were also distributed next to the display board. The objective was for children and adults to take away reading material and for the poster to be mounted in schools and workplaces of the persons who visited the display. 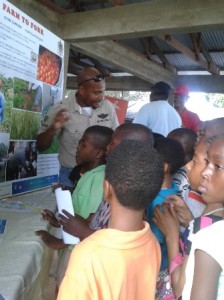 The Display Board has been featured in several other fora since the Agriculture Open Day. One such event was a collaborative effort between the St. Kitts Water Services Department and the Rallying the Region to Action on Climate Change (RRACC) Project at the launch of a climate-conscious water conservation campaign on May 09, in Independence Square, St. Kitts. On that occasion, Eric Browne of the Agriculture Media Unit, presented to the public, the print out from the Display Board that featured irrigation.

A video presentation of Mrs. Blake explaining the display board was aired on PEP TV, a televised Cable Show hosted by Leslie “Sugar Bowl” Morton as well as on Agriculture in Context a programme produced by the Agriculture Media Unit and aired on ZIZ TV.

Ministry of Health on Nevis issues call for MUA/NIA scholarships

Nevis Tourism Authority invites you to “Escape to Nevis