Gingerland, Nevis – She was born on January 19th, 1912 and died on September 30th,  2019.  That effectively made her 107 years of age, at the time of her death and therefore the oldest centenarian in the Federation of St. Kitts and Nevis. 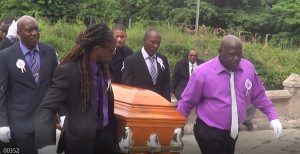 She would have lived through the two great world wars and had many stories to tell, during her lifetime.

The funeral service of the great matriarch was held on Saturday 19th October.  As a fitting tribute, the funeral service was held in three phases:  The viewing of the body and brief service at the New River Methodist Church, where she was one of the original members. This was held from 11 a.m. to 12.00 noon.

The body, accompanied by a fair-sized entourage, was then driven in the vicinity of her original family home, located nearby, for a brief period.

A second viewing was then held at the Gingerland Methodist Church, where there was a huge turnout, who had come out in their numbers to demonstrate solidarity with the family in mourning.  This lasted from 12.30 p.m. to 1 p.m.

The official service commenced at 1 p.m. and was coordinated by Reverends Wendell Samuel; Bonny Byron and Steadroy Pemberton.

The eulogy was uniquely presented by the brother/sister combination of Carlisle Powell and Erma Glenda Skelton, who brought smiles to the faces of the audience as they described in graphic details, the life story of the deceased, in a variety of real-life facets.

Tributes were done by the following:
Joint Methodist choir; Meredith and Sylvia Hendrickson; Tanika Francis, the Sugar Hill String band, the seniors’ group, and the NRP choral.  Psalms 121 was read by granddaughter, Claudette MARIE Ishmael and family members united in reading the Old and New Testament scriptures.  The acknowledgments were done by great-granddaughter, Shrarifa Skelton.

The ministry of the word was presented by Rev. Wendell Samuel.

The body was interred at the Gingerland Cemetery and the extended funeral service was completed, somewhere around 5 pm.

Among the dignitaries present, were: Hon. Eric Evelyn, Hon. Hazel Brandy-Williams; Seniors’ Director on St. Kitts, Ms. Anne Wigley, who indicated that she was representing the officials from St. Kitts and Melanie Janine Browne, aka Mel B, of Spice Girls fame, who is a great-granddaughter of the deceased.