(CHARLESTOWN, NEVIS)– As part of the of the St.Kitts-Nevis Fire and Rescue Services 15th anniversary, a drill exercise and display was staged in the heart of Charlestown on Friday, January 09, 2015.

The event by members of the Nevis Division of the St.Kitts-Nevis Fire and Rescue Services attracted a reasonable crowd of curious onlookers and students from the Maude Crosse Preparatory School and the St. James Primary School.

Coordinator of the exercise, Mr. Kenneth Dore stated that the drill by the fire fighters was to demonstrate to the general public the state of physical fitness of the fire officers, and to demonstrate how they would response to an emergency call.

The drill generated a lot of excitement from the audience. The fire fighters first began by gearing up in full fire fighting gear that is said to weigh up to 150 pounds.

The activities to mark the anniversary continue this evening with a Banquet in St. Kitts. 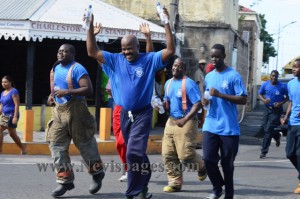