Five Selected and Promoted To the Rank of Acting Sergeant

Basseterre, St. Kitts, August 5, 2016 (RSCNPF): The Royal St. Christopher and Nevis Police Force is pleased to announce the selection and promotion of five (5) Corporals to the rank of Acting Sergeant.

The selection of these officers for promotion was the result of a transparent and competitive process in which all eligible Corporals were encouraged to apply for consideration in the filling of vacant slots. As part of the process each candidate also appeared before an Interview Panel and was interviewed.

Commissioner of Police Mr. Ian Queeley congratulated the newly appointed Acting Sergeants and their families on behalf of the High Command and the Police Service.

In the brief ceremony, words of guidance and encouragement were given to the group by ACP’s Merclyn Hughes and Andre Mitchell. They were challenged to lead, and lead by example. To take care of their officers, and to continue to give of their best as the Police Service continues to strive to make the federation a safer place to live, work and do business. 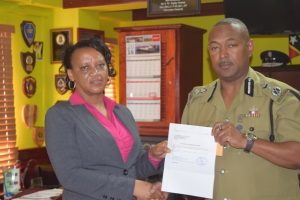 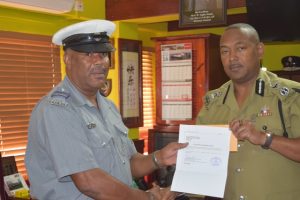