Gayle welcomes the arrival of Sangakkara

PORT-OF-SPAIN, Trinidad (CMC) — Captain Chris Gayle has welcomed the arrival of Sri Lankan batsman Kumar Sangakkara in the Jamaica Tallawahs ahead of their semi-final clash against Barbados Tridents in the Limacol Caribbean Premier League (LCPL).

Sangakkara, considered one of the best batsmen of the modern game, is set to join Tallawahs following the recent departure of young Pakistan opener, Ahmed Shehzad, because of international duties.

Gayle says the addition of Sangakkara will strengthen the team’s batting in tomorrow’s semi-final match at the Queen’s Park Oval.

“Having a player like Sangakkara join the team is a welcome boost,” said Gayle. 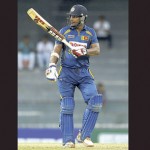 “Everyone knows what he is capable of, the damage he can do if you allow him to play his game,” said the Jamaican.

Sangakkara has impressive Test and one-day international averages of 56.98 and 39.99, respectively, and averages 31.83 in T20 internationals.

Sangakkara, expected to bat at his preferred number three position, is expected to add substance to the Tallawahs’ battling line-up, which has in the past two matches struggled following the dismissal of Gayle.

“We are extremely happy to have him joining us…we look forward to him settling in, helping us reach the final and hopefully winning the tournament,” said Gayle.

The 35-year-old Sangakkara is coming off a recent tour of South Africa with Sri Lanka.