The V&J’s preschool, held its annual sports meet at the Flats in Cole Hill, on Tuesday 12th March.
The distinguished patron was Mrs. Grace Williams-Leich.
The athletes participated in the march past and then got involved in such races as flat races; dress up races; obstacle races; fill the bucket races; socks and shoes and more.
A fair sized crowd was on hand to witness the event and enthusiastically joined in cheering on the athletes.
One stand out race for the little ones, was a particular socks and shoes race for the four year old plus boys.
There were three athletes in the race and the Red house athlete stormed home to victory, way ahead of his two friends. The Green house athlete then followed suit. That left just the Gold house athlete still struggling to get on his shoes. When he eventually got his shoes on, he started walking very slowly towards the finish line and the Red house athlete went for him and escorted him to the finish line, at a fast clip, while holding him by the hand.
Certainly a lesson for all of the adults present!
The parents-both males and females then volunteered to have races of their own, including a grandmothers’ race!
In the fathers’ race, two of the fathers took a nasty spill at the end of the race but it was all in good fun. 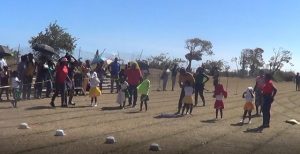 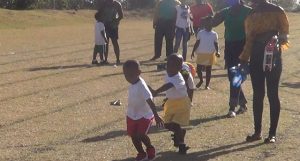