Track and Field Head Coach for the St. Kitts and Nevis National Representative Team for the 2018 Commonwealth Games, Mr. Lonzo Wilkinson, is confident the four (4) athletes chosen to represent the Federation at next week’s games will do their country proud. 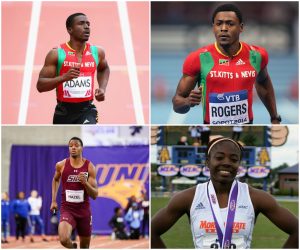 Speaking ahead of his departure for Australia, Head Coach Wilkinson said he strongly believes the four (4) national athletes are capable of advancing to the finals in their respective events.

He said, “The lone female, Shenel Crooke, I know she will represent the females well at the Commonwealth Games, and so I want to say kudos to her. I know she’s going to do her best and we are looking for her to advance to the semi finals and finals, which will be a great achievement for her.”

The St. Kitts and Nevis Amateur Athletic Association (SKNAAA), in particular its Selection Committee, shares the optimism expressed by Mr. Wilkinson in the capabilities of the four (4) selected athletes, all of whom continues to perform well nationally and internationally.

The SKNAAA takes this opportunity to wish Adams, Rogers, Hazel and Crooke the very best at the upcoming XXI Commonwealth Games.

Everything Set for Kick Off of Primary Schools’ Football Tournament