Hospitality Equipment Handed Over To High Schools on Nevis

(CHARLESTOWN, NEVIS)- An important handing over ceremony was held at the Charlestown Secondary School on Tuesday, June 9, 2015.

Education Officer and TVET Coordinator in St.Kitts, Mr. Glenville Edwards traveled to Nevis to be a part of the handing over ceremony.

His mission was to present to the Secondary Schools on the island, a number of ‘hospitality equipment which included: stoves; food processors; blenders; cutlery; demonstration tables etc.

He stated that a project was written by his department and it was approved by the Republic of South Korea. 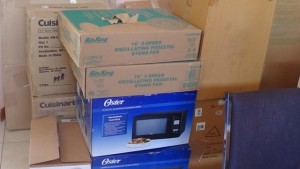 TVET representative for Nevis, Education Officer Mr. Orin Smith was also present at the brief ceremony. He noted that the equipment are top quality equipment and similar to those used in top hotels in the Federation. He thanked Mr. Edwards and his team and the South Korean Government for the timely gifts.

Accepting the gifts on behalf of the Nevis Island Administration was Asst. Secretary in the Premier’s Ministry, Mr. Kevin Barrett who opined that the children who will use the equipment are really privileged as some of them may eventually work in some of the major hotels across the federation and would have had the opportunity of using such top quality equipment in advance.

He implored the teachers and the students to use the equipment wisely and to take care of them.

Also present at the ceremony was Headmaster of the Charlestown Secondary School, Mr. Edson Elliot.

Similar equipment were also delivered to the Multi Purpose Center at CSS.

Later that same day, similar gifts were taken to the Gingerland Secondary School.