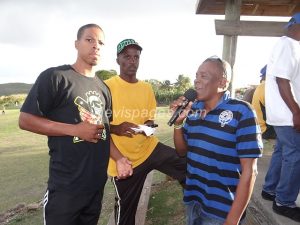 The Village Premier League (VPL) is intriguingly poised as two winning teams from last week went under in the two encounters played on Sunday 29th April.

In the second game of the afternoon, Young Guns who were a dominant force, last weekend, looked a mere shadow of their usually confident selves, when they came up against the Easterns team, which would have lost two matches up to that point.

The Easterns’ bowling was spot on and the Young Guns team failed to fire. They struggled to 61 for 7 in their allotted 12 overs. 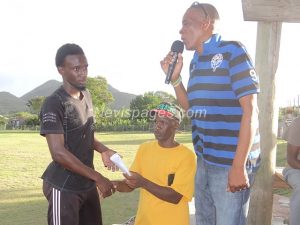 ‘Shell’ Browne-man of the match

Earlier, the dominant home team, Bushwhackers, raced to 60 for 1 in just 4 overs, versus Hanley’s Road and seemed set for a massive score but once Javia Liburd was bowled by Wasim Mintos, the cat was let loose amongst the pigeons and the procession from pavilion to crease and back, was the order of the remainder of the innings.

Bushwhackers catapulted to 96 all out.

The Hanley’s Road team, after an initial scare of losing the big wicket of Tonito Willet, went on to cruise home to victory, on the back of another excellent knock by captain Gavin BULF Wattley.

Akito Willet-Man of the match.