Basseterre, St. Kitts (April 18, 2013) — St. Kitts-Nevis Opposition Parliamentarians have decided to withdraw an injunction which sought to prevent the Federal Parliament from dealing with any other legislative business unless and until the “so-called” Motion of No Confidence is debated. Lawyers for a minority coalition Opposition MPs seeking to end the life of the St. Kitts-Nevis Federal Parliament also lost the argument that their application to have the Speaker ordered by the Court to address the Motion of No Confidence superseded an application questioning the jurisdiction of the Court and to hear an application to strike out the entire case. 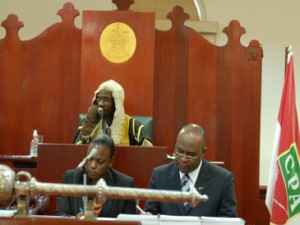 At the commencement of the civil matter in the Court on Thursday, lead counsel for the minority coalition Senior Counsel Douglas Mendes, tried to persuade the Court to consolidate some of the applications including the “application to strike out” with the “applications in relation to the substantive matter”.

But lead counsel for the Attorney General Lord Peter Goldsmith argued that the question of jurisdiction of the Court and the application to strike out the case should be heard before any other application before the Court. He said, “we agree” that no injunction application can take place but “we resist” the proposition by Senior Counsel Mendes.

We say it is not for the Court to say what the legislature should do,” Lord Peter Goldsmith.

After much back and forth between Senior Counsel Mendes and Lord Goldsmith, His Lordship Justice Thomas ruled that he would hear the application of jurisdiction and whether to strike out the case before hearing any other matters in relation to the case. Court adjourned briefly to discuss dates for that hearing.

Both sides have indicated that they would appeal the outcome of the decision on the question of jurisdiction and application to strike out. After the Court of Appeal the matter could be appealed to the Privy Council. It is therefore clear that this court battle will be around for many, many months to come. It is also clear that the minority coalition of Opposition MPs did not leave Court on Thursday very pleased.

Messers Amory and Brantley who are a part of the minority coalition did not show up to Court.

It is expected that the injunction having been withdrawn, paves the way for the St. Kitts-Nevis Federal legislature to get on with its business and all MPs would be called upon to return to work in the National Assembly in the not too distant future.

Candlelight Vigil to Be Held in Honour of Trevy