A brief but significant ceremony was held at the NEPAC courtyard, situated at Pinneys, on the afternoon of Thursday 4th April.
It was just one day after the grand annual Interprimary Schools’ athletic championship, dubbed the MINI OLYMPICS and the organizers made it a point of duty to ensure that the deserving athletes did not have a long wait to secure their medals and trophies. 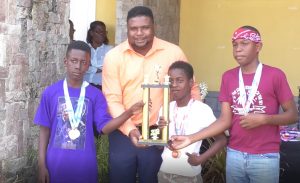 The ceremony was ably chaired by Permanent Secretary in the Ministry of Education and the list of deserving athletes in the various age categories and events, were called to the fore by Meet director, Mr. Garfield Virgo.
The actual presentations of medals and trophies were jointly shared by the following individuals: PS Barrett; Minister responsible for Education, Hon. Troy Liburd; Director of Sports-Jamir Claxton and one of the patrons for this year’s mega event, Miss Lateesha Clarke.
The top three athletes in each event were presented with their respective medals and then the overall top athletes were named as follows:
Class champions
Grade 6-Latejah Bailey-CPS
Tylo Nisbett-STPS

Obviously the athletes gave it their all and this resulted in joint honours for the Victor Ludorum and Victrix Ludorum.
Victor Ludorum-joint- a three way tie in points-
Joric Daniel-JLPS
Adrian Wilkin –STPS
Leon Thompson Jr-IWPS

Victrix Ludorum-joint—a two way tie in points-
Latejah Bailey-CPS
Zhanae Underwood -MCPS
Later, participation medals were also given to all the schools, to be distributed to all of the athletes who participated in the event.