Is the Missing Person’s Notice linked to human remains found in Boyd’s?

By:Erasmus Williams
Basseterre, St. Kitts, February 9, 2020 – It was not immediately clear if a Misising Person’s notice in this weekend’s edition of the St Kitts-Nevis Observer is linked to the human remains found in a dwelling home in Boyd’s Village.
A police statement said police officers discovered human remains after 2 p.m. on February 06 and have issued an appeal for information. 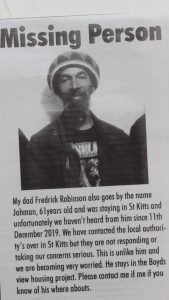 “My dad Fredrick Robinson also goes by the name Jahman, 61 years old and was staying in St Kitts and unfortunately we haven’t heard from him since 11th December 2019. We have contacted the local authority’s over in St Kitts but they are not responding or taking our concerns serious. This is unlike him and we are becoming very worried. He stays in the Boyd’s view housing project. Please contact me if you know of his whereabouts,” the statement in the Observer said.
Police said the scene was processed by members of the Forensic Unit and the incident is currently being investigated by the Violent Crime Unit.
“An autopsy is expected to be carried out on the remains shortly to determine the exact cause of death. Tests will also be conducted to ascertain the individual’s identity,” said the police statement.
The police called on anyone who might have any information regarding this incident to contact the Violent Crime Unit by dialing 467-1887 or 467-1888, 662-3468 or by calling the crime hotline at 707.
Persons are being urged to say something if they saw or heard something.