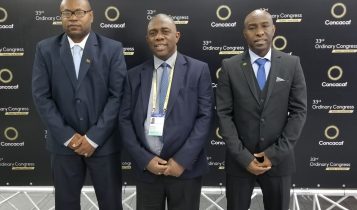 While in Russia, the team attended the CFU (Caribbean Football Union) congress, where the vote for a new president, was the key item on the agenda. In addition, they attended the 33rd CONCACAF Ordinary Congress where delegates of the 41 CONCACAF nations reviewed the performances of the organization for the 2017 calendar year and also approved the budget for the next cycle.

Finally, the St.Kitts- Nevis Delegation attended the 68th FIFA Congress which reviewed FIFA activities for the last period and discussed plans for the new period.

The vote for the 2026 World Cup host was also carried out at the 68th FIFA Congress, which saw the United bid (Mexico, USA and Canada), beat Morocco to host the 2026 FIFA World Cup.

The final activity for the group is set for June 14th, where they will attend the opening game of the 2018 FIFA World Cup between host Russia and Saudi Arabia, as guests of the FIFA President.

The team returns to the federation on June 16th.