Charlestown-Nevis-The sad news was received during the early hours of Friday 24th September, that popular cultural icon, Janice Nisbett has passed away. 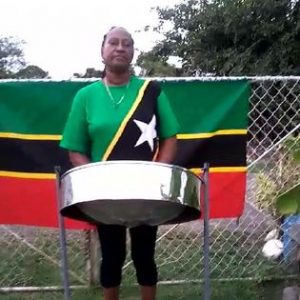 Ms. Nisbett was a mainly self-taught musician who was quite accomplished on the keyboards and the pan.

She actually made and sold pans and taught the art of playing the instrument, to all interested persons, of all ages.

Her music was a feature at the Bayfront in Charlestown, whenever there were cruise ships in the harbour and she was also a regular feature at the annual Alexander Hamilton tea party, which is an avenue for the provision of scholarships to Secondary school students on the island.

She not only mastered the playing of St. Kitts and Nevis national anthem on such occasions but also superbly played the American anthem, as well.

At one point in her life, she was well known for assisting with the sale of tickets for the government-run ferry, but in more recent times, was a clerk at the Public Works Department.