Kanye, Kim in power struggle over their newborn

Kim Kardashian and Kanye West are in a power struggle over their daughter and their public lives.

It is said the Keeping Up with the Kardashians star is “upset” with the amount of control the rapper is taking when it comes to major announcements about her first child North.

An insider told RadarOnline.com: “Kim is getting really upset that Kanye has been taking over and making all of the public announcements about baby North.

“She hasn’t been able to do anything. She didn’t announce that she was pregnant. She didn’t get to show off the baby first.

“Kanye is doing everything and it’s causing a huge power struggle between the two of them.”

The Clique hitmaker is notoriously private and reportedly wants to control his partner and their daughter’s private lives – which is at odds with Kim’s public persona.

The source said: “Kanye wants to make sure that every single aspect of Kim’s life is now handled the way he wants it to be. 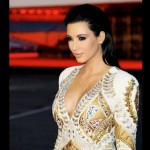 “Kim likes having her picture taken and she knows that she has to do that in order to stay relevant and so she still keeps in touch with paps who can take her picture.

“It is never a surprise when a photographer gets a picture of Kim, and so the two times that she’s been with the baby, at the doctor’s appointment and at Kanye’s grandfather’s funeral, and been photographed are most likely because she has been tipping them off and this is infuriating her baby daddy.”