There was a sizeable crowd on hand on the evening of Sunday 18th May as the action in the Nevis Premier league (NPL) continued. There was added excitement as West Indies star player, Kieran Powell was making his first appearance in the league. 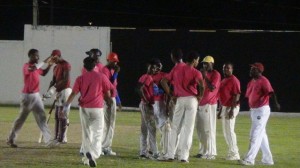 Powell won the toss for his team Oualie Pelicans and elected to bat first and coped very nicely with an aggressive opening burst from former West Indies under 19 speedster, Nelson Boland and went on to execute some elegant shots on his way to a well played half century, before he was brilliantly caught.

Junie Williams played well towards the end of the innings to be not out on 24.
The Bath Hotel Blazers got off to an enterprising start with Kejel Tyson batting superbly before he was bowled when he missed an Akito Willet full toss. Then the team appeared to struggle for a while, with mystery spinner (the local Sunil Narine), Ravindra Balgobin, keeping even Tonito Willet on tight reins. Once Balgobin completed his four overs, Tonito Willet upped the tempo and suddenly they were back in the game.

It came down to 5 runs required off the last over, bowled by Junie Williams. The first ball was flashed through third man for two by Justin Athanaze and then he emphatically deposited the second delivery towards the Villa grounds and the Blazers celebrated.