KP Gives Back To Alma Mater

The Joycelyn Liburd Primary School is not unaccustomed to producing big name stars and the big names stars are making it a habit of giving back to their precious alma mater.

A few years prior to his untimely death, West Indies middle order batsman Runako Morton, a proud product of the school, donated a couple of hundreds of exercise books to the school for use by the school children there. His picture and an inspirational thought were inset on the front cover of the book. 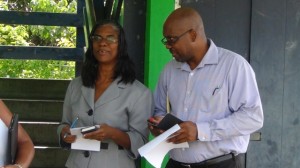 Tuesday 1st June was another significant day at the Joycelyn Liburd Primary school, as a smartly attired current West Indies opening batsman and another proud product of the school, Kieran Powell, also made his presence felt in a real way as he also made a significant donation to his alma mater.

The slimly built former champion athlete at the school, who is already been looked at in some quarters for possible movie star roles sometime in the future, was accompanied by his Dad and present CPL Operations Manager, Carlisle Powell and his aunt Mervette Powell.

Headmistress at the school, Ms Barbara Hendrickson recalled fondly her teaching of the young Kieran in room 13 and noted that he was always athletically inclined and stated that he started to play his cricket at the Hardtimes Play field or ‘ the hill,’ as the school’s nearby play ground is referred to. 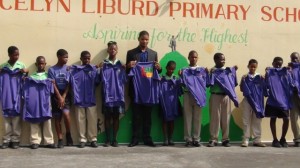 Kieran Powell who is effectively one of two popular ‘KP’s’ known to international cricket, then took the podium and eloquently made his presentation of 17 spanking new uniforms made in Sri Lanka, to Head Mistress Barbara Hendrickson, for use by the school’s cricket team which will be participating in the ongoing Primary Schools’ cricket championship.

The uniforms, complete with both jerseys and pants also officially launched Powell’s new range of apparel, appropriately dubbed ‘KP23’ brand. The significance of the number 23 is of course the number he proudly wears for the West Indies cricket team.

The impressionable 23 year old cricket star in making the presentation, stated:
“This is a very proud moment for me and it is good to see a carefully structured vision coming into effect. A cricketer today is a role model for millions and I wanted to use the opportunity to create a brand that would be individualistic and significant to my fans, followers and the public.

There is no greater feeling than being able to give back to my community and presenting my first signature apparel range to my former school and seeing the difference it will make to its young cricket team and the motivation it will provide them, is a momentous occasion for me,’ he stated.

Powell also made reference to some other initiatives that are currently being fined tuned by his management team:

“ We are working with some prominent partners to make these initiatives happen and there is massive amount of effort going into the projects behind the scenes by my management team who understand and back my vision and are moulding this into a reality while I continue to focus on my cricket,’ he said.
He gave the school credit ‘for moulding me into what I am today.’ He then presented one of the jerseys to Headmistress Barbara Hendrickson, to warm applause from the adoring students.

Teacher at the school, Mr. Tito Chapman, noted that the gift of the uniforms was timely as the school’s team is down to play their first match of the Primary school tournament on Thursday 4th July and hinted towards winning that game and other games in their new look uniform, which by the way, is understandably purple in colour. The colour proudly used by the school during the prestigious inter primary school athletic championship. He indicated that the 17 member squad comprises of 15 boys and two girls.

Little Sadika, a student at the school, also thanked Mr. Powell for his generous donation and promised that they would give of their all during the tournament. She also hinted towards ‘looking forward to many more donations.’

The cricket star then posed in a photo shoot with members of the cricket team.

It was also later revealed that Powell has been invited to travel to Papua New Guinea (PNG), in connection with another of his initiatives, The Kieran Powell Academy, to play the role of mentor and ambassador to the PNG’s international cricket squad. PNG is an ICC associate member nation which will be having a series of cricketing initiatives in September and Powell is expected to be present during that period.