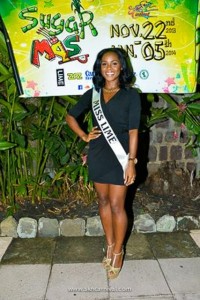 For this year’s competition, five contestants will be vying for the coveted title of National Carnival Queen currently held by reigning Queen Zinga Imo. Kaeve Armstrong who is Contestant Number 4 was enthused to be sponsored by the Telecommunication giant, who has in the past sponsored contestants such as Judy “Purple” DuPont, Markysa O’Loughlin, and Irvinsia Warner.

Amongst the Carnival Officials present at this year’s Sashing Ceremony were Chairperson of Pageants for National Carnival, Ms. Nisharma Rattan-Mack who chaired the event, and the Chairman of the National Carnival Committee, Mr. Sylvester Anthony who expressed his thanks to LIME for its continuing commitment to Carnival and for its Sponsorship of Ms. Armstrong in this year’s competition.

Also present, and representing the Telecomm provider, were LIME’s Marketing Representative, Ms. Sharisma Patrick who had the honour of sashing the enthusiastic Kaeve; and LIME’s General Manager, Mr. David Lake. The vivacious Miss Armstrong, an employee of the Royal Bank of Canada and no stranger to the stage is an ardent music lover and lead vocalist in the Royaltiez Band who and strongly believes that “music can potentially reveal the hidden treasures beneath the surface of many of the Federation’s youth”.

The Board of Directors, Management and Staff of LIME St. Kitts and Nevis would like to take this opportunity to wish Ms. Keave Armstrong all the very best in this year’s Carnival Queen Pageant.