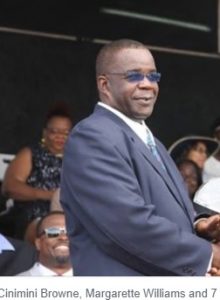 The Calypso Cricket Club and indeed members of the Cotton ground community, teamed up on Sunday 5th May, to host a fundraiser in aid of ailing former Nevis, Leewards and West Indies B team player, Livingstone JAHBADAR Lawrence.
It was a fairly packed day and the people of Nevis showed up in their numbers.
The activities were diverse.
There was the bouncing castle for the children; fishing games and other games; music by a popular DJ and plenty of food and drinks on sale, at a reasonable price.
The main activity for the day however, featured two cricket matches.
In game one, Calypso Cricket got the better of the Highlights team and game two was interestingly poised, when the umpires were forced to call off play, due to bad light.
In that match, the Masters team had amassed 134 and in response the calypso team had already closed the 100 mark, with the overs running out but with Merlin Liburd beating the ball all around the grounds in a quick fire 49 not out.
The crowd was well and truly entertained, even as Curtis Morton Sr and Velly Maynard dropped two sitters, much to their amusement.
Lawrence himself made a brief appearance at the grounds and was able to greet and thank some of the persons who had come out to his assistance.
The organizers have expressed thanks to the many persons who supported the cause.