Man gunned down at the Basseterre Bus and Ferry Terminal

(BASSETERRE, ST. KITTS) – With just 28 hours before the end of 2014 and the start of the New Year, another young man met his untimely demise. 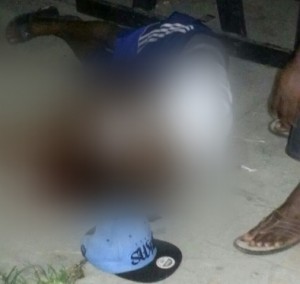 News reaching this publication indicates that a young man was shot and killed last night Tuesday, December 30, 2014 at the Basseterre Bus and Ferry Terminal. Pictures that began to circulate on social media within minutes of the incident clearly indicated that the victim was shot in his head.

He succumbed to his injuries at the scene. Police officers issued a press release of the incident which stated that the identity of the victim would be withheld until next of kin was notified.

However, Nevispages understands that the deceased was the brother of Kenya Francis Mitchum of McKnight Village who was gunned down in Anguilla about two weeks ago.