The Miss Sapphire Swimsuit Organising Committee is getting ready to host its first swimsuit competition. 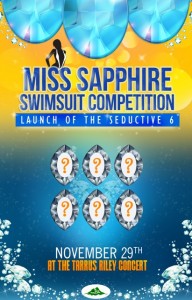 The competition is the brainchild of Mr. Randy Jeffers who currently serves as Director of the Miss Caribbean Culture Queen Pageant. Mr. Jeffers believes the time has come for Nevis to host an event during the St. Kitts-Nevis National Carnival season. He is however adamant that the show is not intended to compete with any Carnival event.

Patrons can look forward to a dynamic package on Sunday, December 21, 2014. The event will not only feature a vibrant display of swimsuit creations but also include music from the Green House Band and a special guest artist.

According to the show’s Coordinator, Ms. Renee Wilkinson, the contestants will be launched on November 29th during the Tarrus Riley Concert. They have been dubbed the “Seductive Six” and have promised to put on an electrifying show.

The competition includes four contestants from Nevis and two from St. Kitts. The organisers anticipate that the show will grow in size each year and eventually include competitors from other Caribbean Islands. The official sponsor is Lime Beach Bar and the event will be hosted by the reigning Caribbean Culture Queen, Yarani Morton.