Nevisians showed solidarity with their CCM led Nevis Island Administration on Saturday January 17, 2015.
In a packed Bronx Hall of nearly 200 citizens of Nevis and St. Kitts, NIA representatives Deputy Premier Honourable Mark Brantley and his dynamic colleague, Honourable Alexis Jeffers, enlightened the attentive audience for well over 2 hours about the state of Nevis, the way forward for the federation of St. Kitts and Nevis and the CCM’s stewardship since taking the reins of office in January 2013. Premier Vance Amory was unable to attend.

Meeting Chairman, Mr. Deon Pemberton gave opening remarks before calling on Father P. Alister Rawlins to invoke God’s blessings. The soul stirring prayer by the Minister included a call to pray for the Prime Minister and leaders of the federation, as well as for calm and safety for the people of our nation.

The Honourable Alexis “Zook” Jeffers was the opening batsman for the evening and his delivery was magnificent. Of the many aspects of his government’s stewardship Jeffers spoke to, he also examined how the NIA’s relationship with the federal government has become counterproductive for Nevis.

He explained the difficulties encountered by the CCM lead NIA because of the federal government’s blatant unwillingness to work with the NIA even though CCM received a mandate from the Nevis people to govern the affairs of Nevis.

He said such a bold stance essentially hurts Nevisians first but ultimately affects the federal relationship. In fact, according to Jeffers, “If we were getting what is due to us in Nevis, I believe we would have been doing better. The leadership in the federation of St. Kitts Nevis must be changed in order to overcome the embarrassment of the last 20 years.”

Jeffers reminded attendees that Unlike St. Kitts, the People’s Empowerment Program (PEP) that was launched in Nevis in 2012 under the NRP led NIA is now managed by a private entity although the federal government runs the very same PEP on St. Kitts. Such action he opined is the federal government’s stance in an effort to alienate and embarrass the CCM led NIA.

Jeffers touched on several projects slated to be implemented in Nevis, as well as measures being made to build a stronger economy, thereby advancing the lives of all Nevisians and Kittitians by extension.

He expressed heartfelt thanks for the opportunity to speak with his Nevisian and Kititian audience after which he yielded to the senior statesman the Honourable Mark Brantley.

Deputy Premier of Nevis Mark Brantley proved his “all-rounder” batsman role as he touched on all things Nevis. He further expounded upon the federal government’s unwillingness to mend fences with the current NIA as evidenced by the embarrassment of April 2014 when the St. Kitts-Nevis Anguilla National Bank essentially dishonored NIA checks resulting in civil servants not receiving their checks on time. Never again should a travesty of that magnitude happen to the hard working citizens of Nevis! Brantley gave his assurance that the NIA has taken the necessary steps to safeguard Nevisians from such embarrassment in the future.

Brantley spoke to the NIA’s concern about the federal government’s reneging on paying treasury bills although it had previously agreed to honor them. He too remarked that monies for budgetary assistance still have not made its way to the NIA coffers.

Brantley suggested that it is the many ill-conceived actions of the federal government that have allowed him to see the wisdom in Unity. His embracing the concept is about moving the islands forward in unison while ensuring that Nevis is fairly treated irrespective of which politically party leads the NIA.

Why Unity? The Deputy Premier stated, “If we are serious about our country, we must do something to rescue St. Kitts and Nevis. The people on the ground, Labour and PAM have decided that change must come if better is to come to St. Kitts and Nevis.”

Brantley believes an alliance of various individuals is the answer to turning things around in our developing islands and making citizens equal partners in the quest for a better federation.

While the Prime Minister’s vision is to make Nevis Green with his Unity or Labour/NRP alliance, Brantley spoke to the various policies and projects his administration is currently advancing and the continued path of success it envisions for ALL citizens of Nevis. Brantley’s suggestion for the Prime Minister still remains as relevant today as when he first uttered it to him years ago; “Stay out of Nevis politics!”

The eloquent orator reminded his audience that the various reforms and standards of governing under a Unity led federal government are clearly outlined in the Charlestown Accord. (Copies were distributed to the large audience).

It is anticipated that the blueprint proposed by Team Unity will set a favorable precedence for the advancement of the nation, thereby positively impacting citizens for generations to come.

An engaging session of questions, answers and comments ensued and both men stood before their audience as servants of the people engaging in fruitful dialogue.

On the passport debacle, Brantley made the point that the opportunity to venture to Canada for another informative meeting with citizens there has been compromised because current visa requirements of the Canadian government bar him from such journey. No visa no Canada!

By this simple example alone, Brantley demonstrated the far reaching consequences citizens have been brought to bear because of the myopic attitude of the Denzil Douglas Labour Party. A Team Unity alliance crushes dictatorial aspirations of ANY politician and assures citizens that we will have “no more maximum leaders but rather maximum servants.” Mark Brantley.

The paradigm shift in overseeing the affairs of the people will see a structure in government that revolves around consultation and discussion according to Mark Brantley.

Quite some time was spent on the discussion of crime and the NIA’s ongoing efforts to stem the occurrence of crime. The use of CCTV around Charlestown has been a deterrent and statistics have shown a reduction in violent crimes on Nevis along with a 65% increase in the detection rate. Measures to assist young men in conflict resolution remain part of the NIA’s objectives. Despite the change in attitudes of many 21st century youth, adult outreach to young people still remains an effective tool in stemming crime. We cannot give up on our youth!

Saturday’s meeting ended after 10 PM on an incredibly high note with mingling, music and refreshments.

The BIG BLUE CCM Machine left evidence of its fiery presence in New York. The campaign for the hearts and minds of all citizens continues. 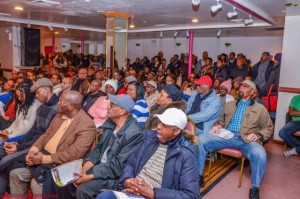 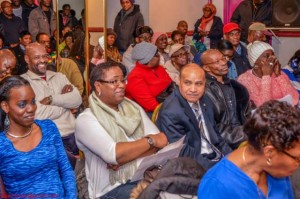 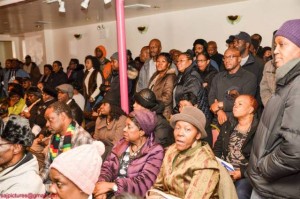 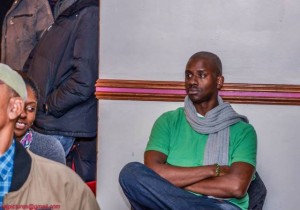 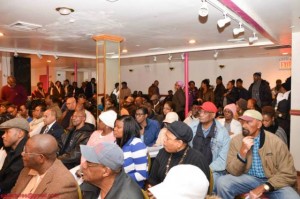