Charlestown-Nevis—The Nevis Academy Primary school, hosted its seventh annual Spelling Bee competition, at the school’s premises , on Friday 5th May.
Headmistress at the school, Mrs. Lucia Wilkerson, chaired the proceedings and in her introductory remarks, noted that the children are being encouraged to read a lot, which will serve to enhance their overall development and the spelling B contest, is one way of getting them to read more.
She also expressed gratitude to the brother and sister team of Carl Claxton and Pat Claxton who operate the business of RELIABLE MOTORS and CLAXTON’S SERVICES, respectively and who have sponsored the event at the school for the last five years.
She also gave a warm welcome to the parents and representatives form several other Primary schools, from across the island.
Mrs. Jackie Jeffers formally introduced the officials, which included judges; scorers, timers and announcers. She also elaborated on the general rules of the competition.

Representing the Claxtons’, was Miss Jadee Caines, who indicated that they were her uncle and aunt and that she performed in a marketing role for them.
She encouraged all present to support the two separate entities, so that they could continue to give back to the community.
The competition then got into full gear, with the grades three and four students who had made it to the finals, taking the spotlight.

The words were presented in the several categories as follows: Easy; intermediate; difficult and unseen and where necessary, there were some tie –breakers.

At the end of that first spell-off, the results were as follows:
1st place-Kasvhvi Roa
2nd Khiara Gill
3rd Syl-Neisya Pogson

Other participants were: Rucha Shama; Kemeaya Hanley; Zaecana Pemberton; Scion Guishard and Zyon Harding
Grades five and six later commenced a very intense contest. They too competed fiercely against each other and there were huge groans when words were misspelt but warm approval, when they got it right.

At the end of the final round, the three top placers were announced:
1st place-Jonathan Essien
2. Mikeala Maynard
3 Nyarah Powell

Other participants:
Amadi Byron-Hendrickson; Nicholos Peters; Devonte Browne; Luare Rodriguez; Bryce Hanley; Sienna Henville and Mauva Hill.
The trophies and awards were duly handed out to the deserving students by Miss Jadee Caines.
The vote of thanks was delivered by two of the students.
According to Miss Wilkerson, the school will be hosting its now annual debating competition, towards the end of the month. 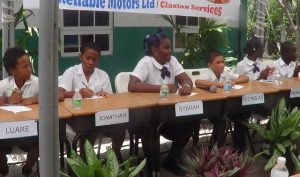 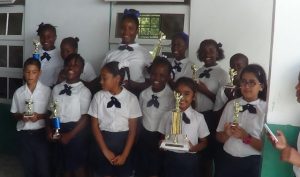 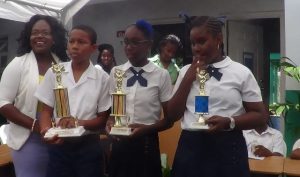