Nevis’ designer to display his talent in Trinidad this weekend

In The federation the name Vaughn Anslyn is recognized immediately with his association to art décor and stage designs. However, audiences were in awe and applauded with respect in November 2012 at the Central bank auditorium in St Kitts at the introduction of his Clothing line “V wear”. 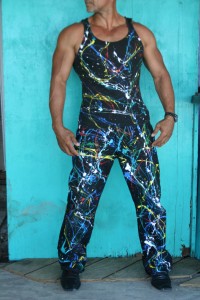 Like most artists, when an idea hits you it must be put on canvas immediately. Such was the case with Vaughn one day as he came home from a lunch function he was attending. Still dressed in his outfit and without thinking he went to his easel, got out his brush and began painting. As he pulled the brush from the paint a sudden gust of wind blew the dripping paint right onto his beautiful black shirt. He was so upset at himself, he added that he took it off, laid it on the table and looked at it. At that instant, something about the way the paint was splattered all over his shirt had a beauty and originality all it’s on. He got the brush and duplicated what happened. “Vwear” was born.

Soon most of Vaughn’s clothes had this look and he saw it as his own personal statement. But it wasn’t until Jason Amory of Movado modeling agency who had seen his clothes, asked him to put together some pieces to feature for an upcoming show. Excited, Vaughn bought dresses, tops, shirts and pants and created a full clothing line. Simple, elegant, original creative are just some of the words uttered but a captive audience as ‘Vwear” strutted across the stage. Jason then took the show to Nevis in February 2013 where it was met by admiration and shock by his home crowd. Vaughn posted his pictures on Facebook and they were liked by all. Within days he got a call from the organizers of Fashion week in Trinidad who received word of his designs by Kingsley Thorne, a noted fashion designer from Barbados, Inviting him to showcase his line at their upcoming event.” Are you serious? ‘Vaughn asked in total shock and went on to receive all the necessary information to make his trip possible. 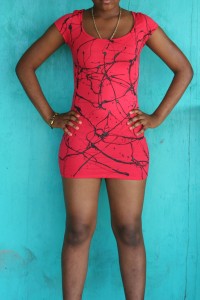 “I have been to many fashion shows throughout the Caribbean as a model, now I get to be the one dressing the models”. While creating new outfits for this show, Dwaine Weeks, a respected makeup artist and model coach from St. Kitts asked Vaughn to showcase his line at the Miss Venus Swimwear pageant held on the 15th of June. “Wow!! I don’t know what to say “says Vaughn. What started out as an upsetting accident has grabbed the attention and interest of many. To my knowledge Vaughn may be the first designer from the federation to showcase in Trinidad and he considers it a great honor.

Some say they are not surprised as Vaughn has a way of reinventing himself in ways that only he can. They are just waiting to see what’s next. He leaves for Trinidad on the 21st of June.