Nevis Premier thanks US Government for assistance; local construction workers for diligence

NIA CHARLESTOWN NEVIS (July 12, 2013) — Premier of Nevis and Minister responsible for Disaster Management Hon. Vance Amory, expressed satisfaction with ongoing construction of the Nevis Disaster Management Department’s (NDMD) Emergency Operations Command (EOC) building at Long Point. He thanked the Unites States of America Government for funding the project and commended the local construction workers for their hand in the advanced stage of works on the project. 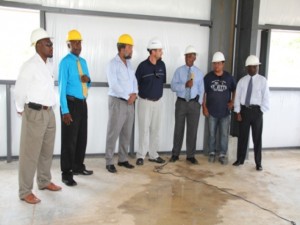 Mr. Amory’s commendation came at the end of a visit to the site on July 11, 2013. He was accompanied by Principal Assistant Secretary in the Premier’s Ministry Mr. Wakely Daniel and Cabinet Secretary Mr. Stedman Tross. Also on the walk-through were Director of the NDMD Mr. Lester Blackett, Engineering Technician in the Facilities Engineering and Acquisition Division of the Naval Facilities Engineering Command (NAVFAC) Mr. Timothy Ryczek and Supervisor  for the Florida-based Contractors Foresight Construction Group Mr. Javier Rincon.

“On behalf of the Nevis Island Administration and I suppose I can extend to the St. Kitts and Nevis Government, we want to thank the US Government for its assistance in helping us to have facilities which in the event of a disaster will enable us to continue to function so that we can have things under control in short order.

“I am very impressed with what is here and in two months this is what has happened and I think we need to feel proud of our Nevisian workers because they are the ones who are doing the contract,” he said.

The Premier described the new addition to the existing NDMD building as useful and stated that the US Government had been helpful to Nevis over the years.

“I think the US Government has been very helpful over the years and we have the first building which was part of our discussion of which we had some maybe eight years ago when Mr. Newton was the Director of the Disaster Preparedness Office.

“This facility, based on what I have been hearing, will be very useful if we were ever to have a disaster which would require our having a facility like this to house the operations of government but also to allow the functions of the country to go on so that we are not cut off from the outside world in terms of communications and so on,” he said.

Meantime, Mr. Ryczek who pointed to the advanced state of construction said NAVFAC was proud to be of assistance to the government of St. Kitts and Nevis and the Nevis Island Administration in making the facility a reality.

“The exterior of the building is near completion, we will be putting in the windows… very soon. The project has progressed much quicker than we thought it would. The contractor has done a great job of keeping our schedule and the government officials, here on island, have been very helpful in helping us proceed through permanent processes and administrative issues that have come up along the way.

“We are very proud to be here and hope to continue ahead of schedule and hopefully finishing before the end of this year,” he said.

According to Mr. Blackett, the facility, once completed, would not only be used as the EOC and office space but would also be available for conferences, workshops etc., so the agencies which wanted a bit more room could be facilitated there.